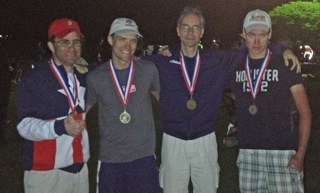 While the criterion racers are busy in Champaign-Urbana, the ultra racers are not holding back.  Paul Dunklau, Martin and Jay headed east on Friday night.  Temperatures were nice, but Calvin’s Challenge 2013 was a tough loop on the south and east stretches, with 16-20 mph winds blowing all day.  About 200 racers reported to the start line at 7:30 AM, including favorite Collin Johnson, who wields a dangerous combination of youthful acceleration and mature stamina.  Within minutes, the pattern of accelerate-decelerate whittled the race from 200 to a lead group of 6, including Jay and Martin.  Paul wisely chose to find another group to ride a more sustainable pace.  After 140 miles of acceleration-cruising, usually pushed by Collin at an average of 23 mph, Martin had enough and dropped to his own pace: even a pull from a friendly recumbent in the lead group was not enough to keep up.  After 180 miles, Jay did the same.  In the meantime, Paul was working steadily with various groups, but many were too slow for him and he rode alone quite a bit.  Jay was riding a strong and steady pace, and would eventually come within 3 miles of Collin, who got a bit tired from his own devices at the end of the race!

The usual little mishaps occurred during the race: Jay forgot to restock his water bottles for one 50 mile loop.  Fortunately, Collin had a spare, and ultra-etiquette was to go into a neutral roll while Jay refilled at the aid station.  Both Martin and Paul wasted about 10 minutes missing a turn while laboring alone in the wind.  Towards the end of the race, while Martin and Jay were zipping around the shorter loop, Martin rode over a discarded swiss army knife blade that cut his tire in half and embedded itself 1” into the rim.  Fortunately, extraction of the blade and replacement of a new tire took only 20 minutes because Calvin’s has a neutral support crew that got to work on the wheel.

In the end, Paul and everyone in the lead group (including the recumbent and another strong young racer in 20-25) won first place in their age group: Collin at 258 miles (overall win), Jay at 255 miles, Martin at 234 miles, and Paul at 212 miles.  Jay came in 2nd, and Martin 4th among the standard frame riders (the race also had HPVs, recumbents and even high wheelers in it).