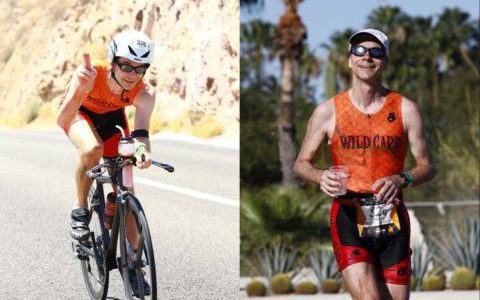 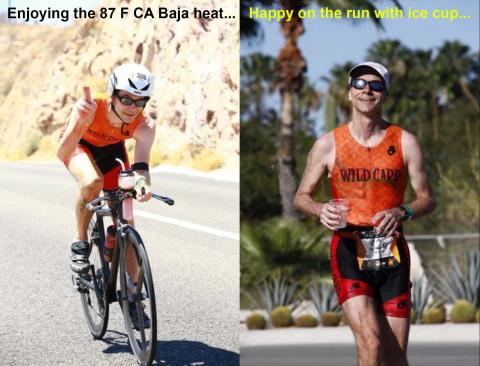 Los Cabos was the third of Martin’s post-RAAM Ironman season. The weekend before, I ran the Mountain Goat 15k in Kickapoo Park, followed by a long ride over all the hills around the park as my last long training.  I came in 8th/128 in the hilly 9 mile race and felt good on the bike afterwards, so I knew the 150 miles-a-month run training had me in good shape. This was the “Run-Bike” part.

Fast forward a week later to Los Cabos, Mexico, a nice touristy Mexican fishing town at the very bottom tip of California Baja. Blue skies, blue Pacific, and 87 F in the full sun. The bike course is hilly, windy and hot, and the run course is slightly hilly with a dirt road stretch and even hotter – not a PR venue! I came in 13th in my age group of 50-54, my best placement yet: I raced about my usual speed for the high temperature (11:23), but the 50-54 year-olds are a bit slower than the 45-49ers!

I arrived Friday afternoon, just in time to register. This being my 8th Iron race, I don’t waste time. After an enforced vacation day on Saturday (IM race registration is on Fridays, the race on Sundays), I slept like a baby Saturday night and got up at 4 AM to get to transition; long live the 2 hour time zone difference in my favor! The swim at Palmilla cove is salt water with wetsuit (water temp = 71 F, the only cool thing in this race). The 1000 person mass start was the usual melee. Nonetheless, I always start at the front, so the fast swimmers can drag me along for a while as they swim over me. Key tip: put on first your goggles, THEN the swim cap; no loss of Goggles that way! I finished in 1h14m, a typical swim for me, so the effect of a dislocated shoulder and 0 swim training in January was not too bad.

Then started the bike ride, which went from warm to oppressively hot as the day wore on. It has dozens of hills in it, all long enough that one can’t swing up the next by pedaling down fast the previous one. You have to do your work on this one, just like in the West Virginia Hills during RAAM 2013. I kept my heart rate between 135 and 140 bpm, a zone I know will allow me to run all the way in the heat later on. With all the climbing I averaged 19.2 mph, similar to the hilly Louisville KY venue. After three loops on the course, which saw very little drafting by cheaters compared to Cozumel, the bike finish was in downtown San José del Cabo, and the spectators were out in droves cheering on the IM competitors.

After another fast 6m transition, I went off to run. I had planned 3 things to get a sub-4 IM Marathon even in the heat: 1) Sauna acclimatization, 2) upping my running from 120 to 150 miles/month in January-March, and 3) something I learned at the miserable Great Illini Half Iron last fall: ice water on the head, as my head temperature is strictly my run-limiting factor between 80 and 95 F. I put on a white baseball cap to keep ice water soaked in for evaporative cooling (ca. 3 minutes/cycle before the hat was dry again). It worked great, and I ran a steady 1h55m half marathon, feeling fine and on track. Then came what I called the “No Man’s Land:” there is a stretch on a bridge and dirt road (yes – cross country IM!) without an aid station and ice water for well over a mile. I ran out of ice water for my cap, and within a few minutes my head was overheated. It took me almost an hour of copious dousing to recover while running 1.5 min/mile slower, before I could speed up again. Still, even without the water I felt better than ever at this temperature, able to keep a 10/mile pace. Must be the sauna. On the final loop, I wised up, took TWO cups of ice water before entering the No Man’s Land, and sped up again to 8:30/mile, passing a bunch of 25-49 age groupers who were muttering about “Jeez, just how many of those 50+ geezers are going to pass us, what is it with those guys, etc.” I could have told them the secret: children in college = more training time! I finished in 11:23, a good time for me at a very hot and hilly venue, and knowing I could probably do it with a sub-4 Marathon even in the heat next time if I grab TWO cups of ice water until I have scouted out all the aid stations. Let’s hope TX is not at 90+ F in a few weeks…