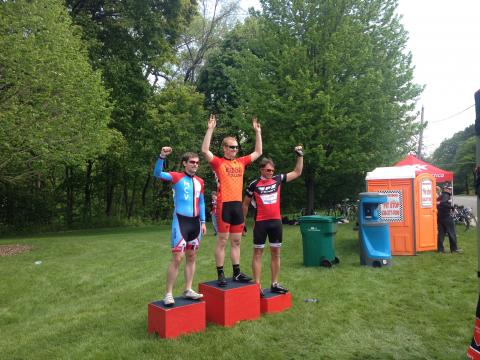 Perfect weather, not hot or cold and a mild wild to keep things interesting.  It was an interesting course; started flat through the first two turns then a small rise, similar to UGP, another flat turn then a left into a small downhill and an off camber chicane up a hill to the straighaway through the finish.

I started near the front and found that I was taking the chicane better than most of the group, I was gaining 3-4 bike lengths through it each time.  It was also throwing a few riders through a loop and there were crashes on the first two laps.

The race was fairly animated through the first half, small attacks but nobody really getting away.  At the first omnium sprint, I came through the chicane 4th wheel and took 2nd in the sprint.  A few laps later, I didn't try hard enough in the second omnium sprint and got overtaken by inches and settled for third.

After this sprint, a small group with a PSIMET, XXX and 2 others went up the road and I couldn't cover the move.  I thought this was a break that would stick so after I got my legs back, I made a bridge to them that took around half a lap.  This really gassed me and I couldn't do much pulling in the break when I got up there.  This was the general theme of the break with only one guy doing any real work.  A few more riders bridge and I'd decided that this probably wasn't going to stick and I drifted back into the pack to recover.  The remnents of the break got swallowed up shortly after.

At this point, I was pretty confident I was going to vomit (another story here is don't eat half a greasy pizza 1.5 hours before a crit) so I hung around in the pack surviving, this was with around 5ish to go.  The one guy that was doing all the work in the break attacked when he got caught and went away solo.  He was still away with a good gap with 2 to go and midway through this lap I could tell the field was giving up on catching him.

On the end of the back straighaway I decided that I wasn't going to sit in and go for a sprint and made a move just before the corner.  I took the chicane with about a 5 bike length lead and drilled it through the start finish with one to go.  I looked back a few times and was maintaining/building my lead to the group so I figured I had second wrapped up.  Coming up to the chicane, I saw I had almost caught the leader and made the catch right after the top of the rise on the final straight away.  I brefly thought about holding his wheel and going for a sprint but decided on pulling around him and heading for the finish.  He didn't try to follow, being gassed from his enormous solo effort and I came across with room to spare for the win.  I was one point off the omnium lead at this juncture.

Not much of a story here.  The course has a big, steep hill that was going to be a killer, followd by a nice descent through a neighborhood then back to the hill.  Up, down, repeat.

I started at the back of the field and failed to clip in for the first 10 pedal strokes taking no momentum into the hill.  I climbed the hill making up a few spots and I heard a bell ringing for omnium points at the top.  At this point I already knew that I wasn't going to contest the race so I figured early onmium points were all I had going for me.

I made up more ground through the downhill and entered the hill around 5th wheel and launched up the hill.  I came across the top of the hill in the lead and heard the real bell for omnium points for the next lap…  Not a great move at all…

I held position through the lap and fell off the back of the group on the surge up the hill for the real points.  From here it was just survival mode.  I found a small group and worked with them for the rest of the race and put down some speed on the last lap to try and shell a few of them.  I didn't attempt to contest the finale figuring we were far enough back it didn't matter.

Overall omnium result was 4th, 2 points off the podium.  Wish I'd have heard the real bell on the second lap…