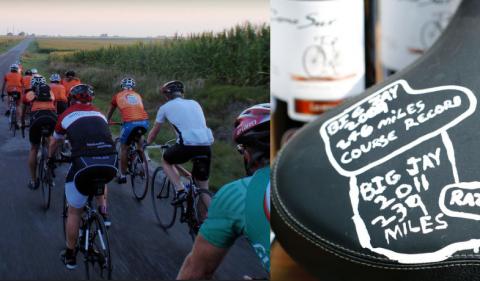 Jay’s Fat Ass Race is an annual ultracycling event held in Mahomet, Illinois, now in its sixth year. The race has grown beyond the local cycling community, and this year past 24 Hour Nationals Champion Collin Johnson and many other ultracyclists from the Midwest, such as Travis Stuckey, Andy Christensen, Valerie Litznerski, and Ryan Heidenfeld, showed up for the race. The traveling trophy is the “Fat Ass Saddle,” emblazoned with past winners. The other trophy is a good bottle of white or red wine (assuming you’re over 21 on race day!). The course is a flat 24.7 mile loop, flat barring a few overpasses. Cooler setup is on a shaded driveway in Mahomet (at Owen’s). A conveniently located gas station mart in Mansfield lies at the half-way mark, just in case. Amenities at Owen’s include water (but BYO sportsdrink/food/electrolytes!), portable toilets, a tent to cool off, and a giant race clock. The tent is manned by volunteers who take down your race number after every loop. In 2014, they were from the local Rotary Club; while the race is free, organizer Jay Yost suggests a small donation to the Club, who uses it for charitable causes. The race also features traveling mechanic Brent Racobs, who roams the course in a van to help with flats and assist cyclists in distress – aka “sag wagon.”

The Fat Ass loop meanders among corn fields and through small towns on smooth tar-and-chip roads, with an occasional asphalt county road thrown in. Traffic is low, although there are two track crossings, one traffic light (just before Owen’s), and three left turns with stop signs that require rider attention. The weather in July is typically 80-90 F, humid, and often sunny, making for a challenging race in the afternoon. 2014 was a ‘lucky’ year, with ‘only’ 80 F in the afternoon.

Forty-two racers showed up for the 12 hour and 6 hour races. The youngest 12 hour racer was Mary Grace Blunt, only 15. The oldest 12 hour racer was Ed Melton, age 71. The 12 hour race started at 6 AM, after some instructions from organizer Jay Yost, who races himself. Key instruction: “No whining” at the day’s heat or otherwise – ultracycling is a sport meant for suffering! The race led north out of town, clearly marked everywhere by large red arrows on the road, before and after turns. A lead group quickly formed, while the rest of the racers formed assorted groups to reach their goals – ranging from a PR to doing their first race over 100 miles. The lead group including Johnson, Yost, Stuckey, Christensen, Litznersky and Heidenfeld was accompanied by local criterium racers from the Wild Card cycling club. It accelerated to cover the first 25 miles at about 23 mph. The crit racers enjoyed sprinting into towns, speeding up the peloton on occasion, usually led enthusiastically by Rick Riley. After 50 miles, the tempo was still 23+ when the leaders came back to Owen’s. At that point, the race winner from 2012, Martin Gruebele, and a few others, were too slow following Nature’s call, and got dropped by the lead group, which wasted no time exchanging bottles and hopping back on their bikes.

Gruebele, Nick Paulson and Ryan Linne had already decided before the race to form a mini team, guessing that Collin Johnson and Jay Yost would eventually ride them off their wheels around 150-200 miles. The goal of the mini team was to average a steady 21 mph for the whole race to maximize distance and get close to 250 miles. After getting dropped by the leaders, Martin and Nick picked up Ryan Harden for two loops until he needed a break.

The lead group was blazing along on loop 4, when a treacherous pothole caused a crash, and Christensen went down. No one was injured with more than a few scrapes, but it took a few minutes to fix a flat and bent derailleur while everyone waited. In the meantime, Gruebele and Paulson had caught up with Valerie Litznerski, who was well on her way to a new women’s course record and PR. The second group, now separate, passed the leaders as they were finishing repairs. The lead group, powered to 30+ mph by Collin Johnson caught up at the end of the loop, and Ryan Linne transferred over to his mini team. The trio plus Valerie rode out several loops behind the four remaining leaders until Valerie and Nick needed a pause and Martin and Ryan L. continued alone.

It was now High Noon, and the six hour race started. It runs from noon to 6 PM, so the 12 hour and 6 hour racers can enjoy free beer together at the post-race party, and so the 6 hour racers share some good suffering by not avoiding the hot afternoon hours. This is a much smaller field (6 in 2014) for those who can’t fit the early morning start into their schedule. Chris Farrell, Christin Vaccaro and Charlie Smythe raced 4+ loops, while local star runner Audrey Ishii raced in the Female 50+ category. A student from the University of Illinlis Chemistry Department, Piyush L., had also heard about the race and came out for a distance PR.

In the meantime, the usual race of attrition was going on at the front of the 12 hour race, with Collin and Jay setting a high pace. In loop 7, Ryan L. and Martin picked up Ryan Heidenfeld who had come off the lead group. Ryan L. drove the pace hard for a while, and Martin had to beg off with stomach troubles. The Ryans kindly dropped the pace for a bit to drag the old man, and Martin rejoined after digesting his gel.

At the end of loop 9, the lead group was down to Collin, Jay and Travis, with Martin, Ryan L. and Ryan H. in pursuit almost 10 miles behind. Ryan H. decided to take a sandwich break at Owen’s; Ryan L. and Martin rolled in neutral for a few miles, but with still no sign of Ryan, H. they picked up the pace to the max to see if they could complete 10+ loops in the time left. They shot past race mechanic Brent at 23+ mph in Mansfield. Brent had been helping cyclists stranded on the course all day in Jay’s Yukon. Ryan L. was riding like an animal, and Martin had enough glucose back in the system to keep up. Ryan and Martin beat the clock by 3 minutes to loop 10, eventually clocking in 247.7 miles for the 12 hours.

The partial loops at Fat Ass are done on an honor system: all racers are asked to synchronize their watch with the race clock, and note their mileage when they pass the race clock after their last complete loop. The extra mileage they accrue riding on the course until 12 hours are up is then added to the number of full loops ridden.

As expected, Valerie came in with a PR and a new women’s record for the Fat Ass race, at 232 miles. Jay and Collin co-opted 1st place with 258 miles, closely followed by Travis Stuckey. Ryan L. beat his Calvins’s Challenge mileage by 33+ miles, an outstanding improvement even with the less windy weather at Fat Ass. Same for Ryan H., who went from 210 at Calvin’s to 245 at the Fat Ass, 35 miles more! Martin won the 50+ age group with a 12 hour distance PR, and Nick rode a 231+ mileage PR, which will come in handy at Ironman Cozumel later in the season. Andy Christensen was not deterred by the crash, finishing with 247 miles. The most amazing racer of the day was 15 year old Mary Grace Blunt: she put in 8 full loops with dad Chris Blunt (almost 200 miles), setting a course record for youngest racer that will be hard to break. The “most unusual bike” award definitely goes to Karl Crapse,
manager of the Wild Card team, who rode 75 miles on a 29” fat bike, all too fitting for the Fat Ass race.

After the race, everyone enjoyed the party: free beer, side dishes and softdrinks, and a hot grill where by tradition racers bring their own favorite food to grill. Race organizer Jay Yost handed out wine bottles to overall and category winners (see roster and times below), although Mary Grace had to hand hers over to her dad immediately. Collin and Jay co-signed the Fat Ass saddle, the race’s traveling trophy, with their names and a new course record of 258 miles.