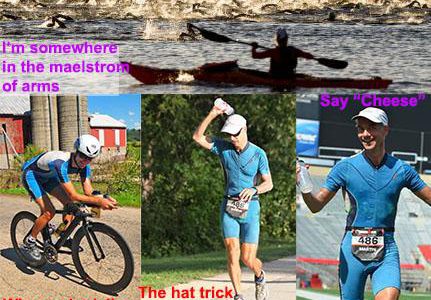 Reported by Martin. The short: The UIUC professor trio of Bruce, Andy and I again headed to race, this time in Madison, Wisconsin. Temps and humidity got to 79 F and 40%, quite a bit higher than predicted. All went by the book in 11:47 for me. 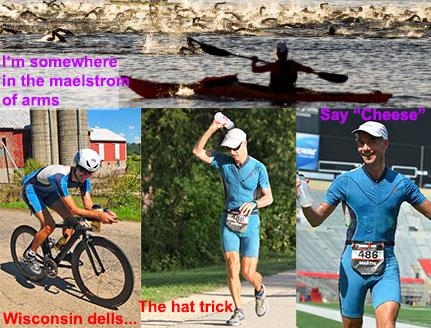 The long: Madison is a nearby IM, with a single loop wetsuit-legal lake swim, a hilly bike ride, and a run through town with some short but steep hills in it. Based on the hilly bike and run, I figured a 11:30-11:45 finish was in the cards at a 138/140 bpm heart rate on bike and run. Not a PR course by a long shot, but at the forecast 74 F, 30% humidity, it promised to be moderate. Never trust the meteorologists!

I stayed at a Travelodge 5 miles from T1 on Hwy 151, right next to a convenient bike store for supplies. Parking on Blount Street was free and easy, a few blocks east of T1. I registered, having just before visited the MSU Physics department for a lecture and to talk to scientific collaborators. Registration was unusually slow, but I talked to some interesting people while we were all waiting in line. I now have a whole pile of those IM bike tools you get as swag. The bike and bag drop-off on Saturday were also at the “Monona Terrace,” a conference center right on the lake, with T1/T2 on the roof of the parking garage! After that, off to a beer and light dinner (took forever!) with Andy, Bruce Hajek and their friend Bruce Rodgers, who was also racing.

Up at 4:45. The morning of the race was cool (~60 F), promising enough. I got into the water at 6:50 and went right to the front at the outside buoy past a ski ramp, the one they warn you not to go beyond because all the aggressive fast swimmers go there. When the cannon went off, I got dragged along nicely while they all swam over me. Never mind, I have plenty of elbow grease, and my 1:17 swim was on the fast side thanks to the drag and an occasional draft. No eye infection from Lake Monona (see last report) despite another leak – I tossed those goggles finally.

T1 is interesting: you run up the helical parking ramp, change in the conference center, then run out onto the top deck of the garage along a ¼ mile stretch of bikes. They really should call this a tetrathlon because T1 qualifies as its own ¾ mile hilly run!

The bike ride gradually heated up, but I kept to my 138 bpm throughout, pedaling down the hills at 40+ mph while the non-ultracyclist-triathletes coasted. A warning: the first long descent at the end of the loop is marked by a “Warning – Slow!” sign and really has a sharp turn at the bottom. The remaining warning signs are BS and you can pedal down the hills at full throttle. I passed the usual 100s of cyclists. The few that passed me were all in younger age groups. It got hotter and sunnier after 11 AM, so I added 4 S-caps to my diet of a gel every ½ hour and a bottle of Perform every hour. I also started flushing my helmet with water regularly after noon. The only excitement on the ride was that a volunteer on loop 2 did not release the water bottle handed to the rider in front of me, who crashed right in front of my wheel! I managed to swerve around him, but then a pandemonium of cracking carbon frames and screams ensued behind me. Close call. Done in 5:43.

I felt good off the bike and ran at 140 bpm through downtown Madison, as planned. However, around 4 PM I really started to feel the heat and my speed became limited by reduced gel and coke intake. I throttled the hr down to 130 bpm and kept running all the way with no aid station breaks or walking up steep hills, but thinking “WTF… 74 F and 30% humidity has never felt this bad before, I must be getting soft .” Still, I knew I wasn’t doing too badly because not a single 50-54 runner passed me on the entire marathon. I finished in 11:47, at the slow end of what I thought possible. No wonder! When I checked the weather almanac the next day, the high was 79 F and humidity 40% – those who run IM marathons know that those extra degrees and % can make quite a difference. No wonder the Pro winner took 8:31 (a fast course is closer to 8:10).

Andy had his own adventures: He was still jet-lagged from a trip to Italy. A bee flew into his helmet at mile 105 of the ride and stung him again and again – he had to stop and eject it from his helmet. Nothing like racing a marathon with bee stings on your head! In the heat, he nearly bonked twice on the run, but recovered each time and picked it up again for a sub-5 run. Bruce again had a well-balanced race, with a 6+ bike ride and a sub-5 run even in the heat. Both finished under 13 hours, Bruce as 21/119 in his age group. Kudos.

I picked up more world rank points than at Boulder (too much altitude) or Louisville (too hot), staying at the top of the 50-54 IM world ranking list. I think I’ll stay there until Kona qualifiers who’ve already done two IM races set things straight in October. I dare them to do 10+ Ironmans in a season, though: quantity has a quality all its own!