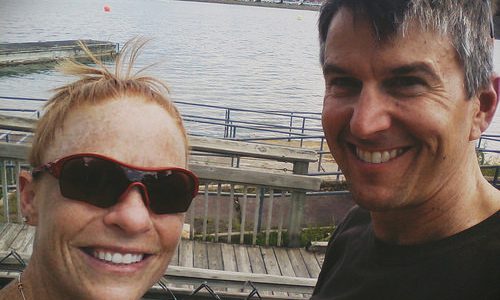 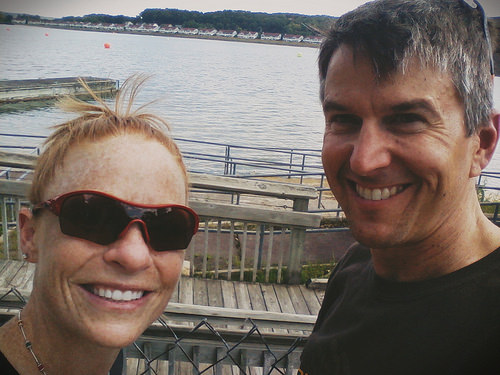 Suzanne used the race as training and tune-up for the upcoming Ironman Arizona. Scott has taken most of the year away from running to let his arthritic left foot recover.

The intra-team competition looked really interesting on paper. Suzanne is a stronger swimmer. Scott is slightly faster on the bike. We figured Suzanne would exit the water with a 10-minute lead. Would Scott catch her before the finish? In a regional race without the competitive draw of WTC Ironman, Scott is not used to losing to women, but Suzanne is a superchick and top-10 age-group national champion. All of her training partners are men because there are no women within 150 miles that can hold her wheel!

The swim was absolutely beautiful. The water in Versluis Lake is cleaner than anything in the Land of Lincoln and the morning weather was perfect. Suzanne found a really big dude to draft in the second major pack and saved some energy. All was well until another woman tried to muscle her off the feet she was following. Suzanne would have none of that. The other chick swam ahead, but chopped Suzanne's calf before saying goodbye. Mental note taken. Suzanne was about 10th out of the water and the 2nd woman. Scott lumbered along slowly, saving plenty of energy for the bike.

The weather was great early on the bike – overcast, upper 60s, with some wind that was mostly blocked by trees. The 2-loop course was a constant diet of rollers with only a couple steep pitches, but definitely featured more overall climbing than most races. It was not a course for a distance PR. Suzanne and Scott both had power targets for the race and both matched them very closely for the first 56-mile loop. Things began to unravel a bit on the second loop, especially for Suzanne, who trained hard through the week as this race was not the primary objective. Her coach told her to take it easy until the final 20 miles or so, but a week's worth of computrainer intervals, treadmill hills, and recovering from a bike crash just a week ago caught up with her a lot sooner than planned. She struggled a bit with race nutrition as well. Scott caught her at about mile 66, but he wasn't feeling too much better. This was mentally a very tough part of the race – far enough from the start to induce fatigue and too far from the finish to empty the tank.

Another few miles into the race, dark clouds loomed on the western horizon. Thunderstorms were in the forecast, but the racers hoped they would hold off until closer to the finish. As Scott approached the aid station at mile 83, the volunteers waved him to a halt. The race is on hold: lighting and a deluge at the finish. Suzanne came a few minutes later, but not before overtaking her arch-rival from the swim. The time of arrival of each rider was noted and they would try to restart later, taking the stoppage time out of the total. A half hour later, the call came in. About 12 sweaty athletes and their bikes loaded into the back of the U-Haul originally used to transport aid station supplies. Scott thought they might try to smuggle us into Canada, but the back door opened about 25 minutes later at the finish.

The lightning was gone and just a drizzle remained. Too bad we could not have waited it out a little longer. Suzanne and Scott both seemed to recover well on bananas and pretzels during the hold and were ready to finish strong. When the results are sorted out, Suzanne should be listed as the top overall female aquabike – not bad for bonking on a race with no taper. Scott should be near the top as well, but a few arrived at the aid station ahead and there may have been others up the road at the next station. We shall see.

We were probably doomed from the start. Most of Suzanne's training partners have crashed or suffered recent race mishaps, while Scott spent a lot more time with another woman on his wife's birthday. But all the bad luck has been flushed away and Suzanne is poised to crush Ironman Arizona! She's also representing Team USA at the Age Group World Championships in Chicago. Scott's planning to wind the season down with the Tri the Illini sprint and possibly a half-iron aquabike at Border Wars in October.