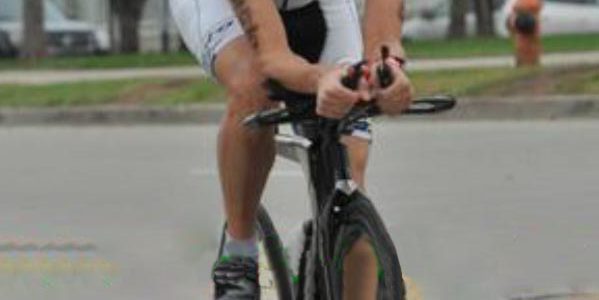 Martin’s report. The short: Warm-up race for the Tunnel Hill 100 ultrarun in November. 11:36 with a swim faster than in 2014, with no swim training for 2 years. Despite a 25 mph rainstorm at the end of the bike, Louisville is more pleasant in October than August! 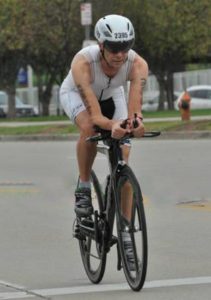 The long: Drove down for my 4th IMKY on Friday, arriving 20 minutes before the registration deadline. Woke up at 6 AM on race day, drove over to the Great Lawn, and got in line for the 1:10-1:20 swimmers about 15 minutes before race start. After 19 Ironmans, there is no more ‘wake up early nervous’ or ‘get to the start and stand around an hour’ or ‘check that tire pressure at 5 AM one last time’ any more.
The new self-seeded swim start is much superior to the old ‘get to end of line’ swim start. The gun went off for the swim, and I jumped off the dock about 15 minutes later, after woofing down a gel and Red Bull. The water in October is cooler than in August. I occasionally drafted, but mostly swam alone on the right of the crowd. Home in 1:19, faster than in 2014 even with no more than ~10 pool swims since 2015. On the bike, they improved the course by cutting out a steep down/up out-and-back. I grabbed orange Gatorade (yech) about 25 miles in, just before LaGrange. 10 miles later, I almost ran into someone who suddenly slowed down and moved left into the pass zone up a hill. I managed to avoid him by passing on the right with a ‘Whoa, whoa!’ The ride was uneventful except that my stomach mysteriously felt bad, and I could only eat 4 small energy bars (80 cal each) and drink only about 2 bottles of sports drink (about 150 cal each) for the whole ride. The last 20 miles were pretty awful, as the 15 mph headwind changed into a 25-30 mph headwind driving rain, branches and leaves into my face for an hour. Back in T2, my right foot was suffering  both an incipient toe blister and anterior tibial tendonitis = ATT – the latter probably due to large (up to 80 mi.) weekly mileages training for Tunnel Hill 100, while running too much on my heels. I spent an extra five minutes drying my feet with corn starch powder and putting vaseline between the toes, to avoid a major run melt-down. 11 minute T1, but it was worth it, as neither potential problem asserted itself big-time during the run. Off on the road with sunglasses. (I swear I was the only one wearing sunglasses, as it was an overcast afternoon and the temperature dropped from 75 to 60 throughout the day.)
I knew I’d have to be careful on the run because I was low on glycogen. As I was beginning to slow down a lot around mile 5, I tried chicken broth on a whim. I had already taken ibuprofen (for the ATT) and 300 mg caffeine (lower perceived effort), so what the heck. After about 10 minutes, I felt much better! So I kept on a diet of ice water, a sip of stale Coke, a salty pretzel, and a cup of chicken broth at every aid station that had it. When they did not, it was much harder to get to the next one. If that was a placebo effect, it was a pretty strong one! My stomach felt much better on this diet than it had on energy bars and Gatorade on the bike. So I think chicken broth does have the energy density and digestibility to keep me going when reserves are low. Good to know. My system had 0 desire to accept Gatorade or energy bars. I am cutting Gatorade out of my ultrarunning nutrition program.
I got to the finish in 11:36, around what I expected, although I would have thought the swim would have been 10 minutes slower, and the run 10 minutes faster. The bike time was spot-on for this course and the superbike: 5:31, after a 5:44 in 2014, a 5:50 in 2011, and a 5:35 in 2010. Long live superbike, shaved legs, and a visored aero helmet.
I hope that the unusual tendonitis at the upper front of my right foot heals up enough in a few days to resume training, and build up for one last mileage peak end of October, before I taper for the Tunnel Hill 100.