Calvin’s Challenge, the venerable race in Ohio, has been rebooted by Maria Vazquez. Jay, Ryan, Rikki and I headed out to meet Collin Johnson in Springfield. Collin won overall, and the Champaign crew did well. 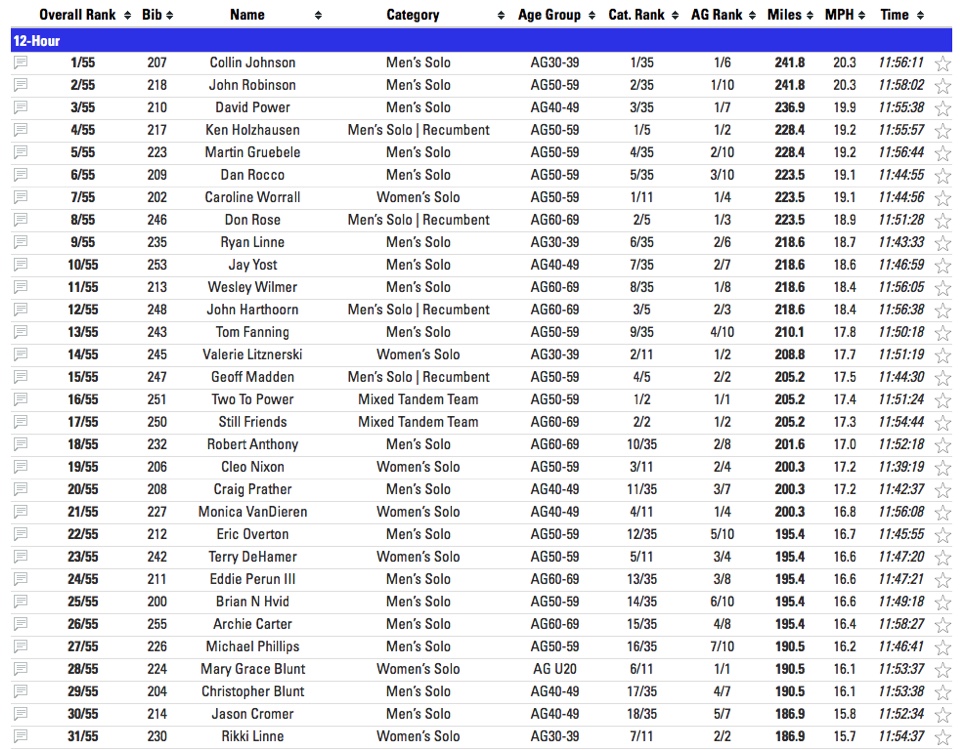 Rikki and Ryan headed out early, and got our race numbers for us. Jay and I met up with them at the Quality Inn, and headed for early sleep. Up at 4:30, we were quickly in our gear and at the Knights of Columbus meeting hall, the race headquarters. There’s a big parking lot, and the start/finish was organized so that if you did not need to stop, you could cruise through without passing by the row of coolers and crates the racers had brought. There was a tent with food during the race. The bathrooms were inconvenient at the back of the building with just one stall: well, there’s always on-course #1.

The race started promptly at 6, and a lead group with Collin quickly disappeared. Rikki was riding with a more leisurely group behind, and I got in my aerobars in-between, with no intention of killing myself at the start of the race, having ridden 100+ miles only once in 2018, at Ironman Texas the weekend before. Ryan had a small mechanical, and soon I caught up and we were riding together. Still in the first loop, Jay dropped from the front when they went crazy at 27 mph, and now we had a nice group of three working together. For a little while, a 4th rider joined us and then fell back. Finally, Ryan could feel his back, and dropped back to find Rikki. For a while longer, I rode with Jay and two riders on their loop #6 while I was on loop #7. Finally all three dropped off, and I hit the gas for a while on loops 8 and 9, going solo. I was passed by a group of 6 hour riders but decided not to tag along: it seemed unfair to coast behind a fresh group in a different race category, even though it was legal. Only drafting on the 24 hour riders, weary from being on the road 12 hours longer than I had been, was not allowed. On the out-and-backs near the finish, I saw Jay and Ryan a few miles behind, and Rikki getting close to 200.There was not quite enough time for a loop #10, so I did four of the short 5 mile loops and finished at 11:56, only a minute or so behind 3d place overall.

I finished 5/55 with 228 miles, not bad considering I’m training exclusively for ultraruns and not for ultracycling or Ironman this year. Ryan and Jay came in 9th and 10th at 218 miles, and Rikki put in 187 miles. A solid day for the Champaign contingent. Collin, his smart and wonderful wife, Jay and I had dinner at a really delicious Mexican hole-in-the-wall Taco place, Señor Piquin.

Small things I would improve: do just one podium ceremony for the top 3 in each race (24/12/6) and category (standard/bent/tandem); get better swag: the T-shirt should be ‘tech,’ and the bike bottle high-grade polyethylene, not the type that does not flex back out when you squeeze it; more port-a-potties at the start. Things that were great: the volunteers’ traffic directing; some real hills; Maria Vazquez roaming the course in her Mini; they did not do age groups, and I applaud that, as not everyone in an age group with 2 participants needs a winner’s medal; the 23.5 mile loop that got you back to your stuff in 1+ hour with no need for a second aid station; the quiet and mostly smooth roads, except for a couple of miles near the start. I’m back next year if it fits my calendar!