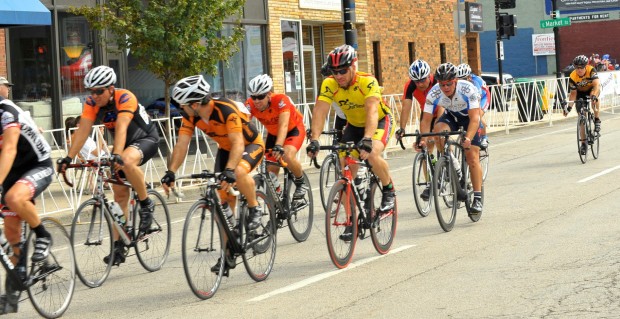 I’m gonna admit upfront that I had very low expectations for this race. I did crappy at the TT on Tuesday and then didn’t feel that great on Wednesday Night. My expectations were downgraded when I arrived at Bloomington and saw that 50% of the course was uphill and the temperature was in the 90s. Both of which cause me to struggle.

That said, I lined up with 17 other guys including Tom Mathis and Larry Johns. The first couple laps were fast but not overly fast. I was quickly surprised that everyone seemed to take it easy on the uphill portion. My exciting began to increase as I realized I wasn’t going to get dropped/pulled too quickly. After a couple laps of sitting in the back I decided to work my way to the front. There were a couple tight corners, so I wanted to be close to the front to avoid any issues. By this point the race slowed down a bit. No one was going hard on the uphill portion and most guys were coasting on the downhill portion. I considered an attack but with 14 laps to go, I figured I’d just be the first idiot to blow up too early. The first attack came on the uphill section at 10 laps to go. About four of us shut him down by the top of the hill. He kind of sat up but stayed with the group. The pace stayed tame again for the next 4-5 laps until the next attack. Since I was near the front, I hopped on with two other guys to shut it down. We kept the pace up for a full lap and I assumed we had a breakaway but when I looked over my shoulder I saw we only had like 10 seconds on the group behind us which diminished to zero on the downhill where no one wanted to push.

The last 4 laps got fast on the uphill but no one worked on the downhill. Even though I felt good, I decided to not attack before the last lap. I was sitting high enough for a decent result and didn’t want to lose it by going too early. On the next to last lap the pace got quicker but still not horrible. On the last lap uphill section there was an attack. Two guys went hard and I followed. A few of the guys in front of me didn’t follow and I had to go around them. This put me in a bad position to take the last uphill corner. Luckily the group went wide and I didn’t lose much speed. I “should” have attacked going around the top of the course to get better positioning for the downhill side of the course but hindsight is always much clearer. Once we started on the downhill section I was sitting 7th wheel. The first two downhill corners are pretty tight with no room to pass anyone and by the time you get to the finish straight it’s fast enough that you have to be really close to the guy ahead if you want to pass them before the line. I came around the last corner about 4 lengths behind the guy in front and 5+ lengths ahead of the guy behind. I knew I wouldn’t catch the guy ahead as I was already going 34mph so I just sat up and coasted across the line.

I’m regretting not attacking at the top of the last lap (after the first attack) but at the time I was just happy to be where I was. If I would have gotten around a few guys at the top I would have been able to hold my place to the finish and be in the money. I guess you live and learn.

All in all, it was a great race on a great course. The heat sucked, but once you were moving, it wasn’t that bad. I’d call it a success for my first Cat 4 race.

I was also registered for the 3/4 race but by the time I “cooled down” and subsequently heated back up after the 30+ 4/5 race, I realized there was no way I would be able to race with the 3s with only 30 minutes of rest. I haven’t seen a race report from Chris or Rick, and USACycling doesn’t have results yet. So I’m not sure how it went.

As an amusing side point, the field got a warning, and then another guy got relegated because he received an illegal hand up… In a 40 minute crit.