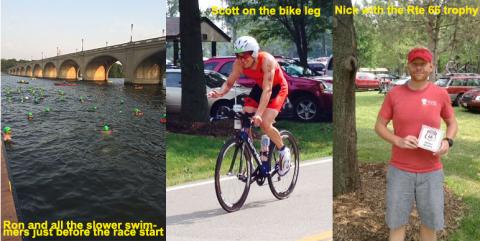 The short: The Route 66 triathlon is a Half Iron distance race in Springfield: 2000 m swim, 56 miles on the bike, and a half marathon run. Nick Paulson headed over to do it solo, while Ron (swim), Scott (bike) and Martin (run) relayed to save Martin’s legs for an Ironman next weekend.

The swim went smoothly for Nick with a time of 37 minutes. Nick’s solo bike effort went pretty much according to plan.  There was wind and rough road sections to deal with, and it got progressively warmer throughout the morning.  Nick could feel the effect of 231 miles at Jay’s Fatass 12 hour race from the weekend before, finishing the bike in 2:48. The run course includes several out and back sections on rolling country roads with some tree cover. It was challenging only because of the high heat and humidity.  Nick ended up passing everyone who passed him on the bike, plus quite a few more: the last part of the run is really where Iron business is done! Nick’s run time of 1:49 was limited by the heat and humidity. This race was 30 minutes faster than Nick’s last really hot Half Iron (Racine 2013), thanks to the “hat trick” on the run: you wear a cap/towel over your head, and douse it with ice water refilled at aid stations to get constant evaporative cooling on your head.

Ron led the relay team. After Martin’s and Scott’s dire warnings about weedy Lake Springfield, he was pleasantly surprised: no weeds.  Miraculously, “The temperature was below 78,” according to the race director.  Ron didn’t bring his wetsuit – but who needs that?  Rocking his Wild Card colors, he got permission to start off with the first wave.  After a few hundred yards of bumping and sprinting past slower swimmers, Ron was alone with the lead swimmer kayak.  The next 1000 yards into wind and choppy water was difficult swimming, so Ron put in even more time on weaker swimmers.  Finally, he heard the beautiful words of “The first swimmer is now leaving the water.”  28:37 was slow for normal conditions, but today the next best swimmer, Ron’s 20-year junior, came in at 31:35, so Scott and Martin had a 3 minute cushion to blow!

Meantime, Scott had warmed up on the trainer. Thanks to a USAT official making the rounds, Ron and Scott did the swim-bike exchange by the book. Exiting transition, Scott received the VIP treatment befitting the race leader: a lead car with a dude doing a Prudhomme TdF imitation through the sunroof, and cheering spectators. This was Scott’s first flat-out TT of more than 40 km. Extrapolating, he figured 230-240 watts would be a good target – about 15% below his 60-minute power. This worked out well in a strong southwesterly wind and on roads that included a section that looked like Windsor in Urbana, requiring bunny-hops! With 4 miles to go, a voice from behind says "I was wondering why it took so long to catch you: Relay!" The eventual overall winner managed to get past Team Wild Card with a 2:18 ride before Martin took the chip.

Martin took off after the race leader. The “hat trick” worked nicely again, as it had for Nick, so Martin kept a steady pace at 169 bpm thoughout the half marathon while dousing ice water on his cap. At 83 F and 95 F heat index, a pace of 7:51 was all that maxed-out heart rate could produce, and Martin slowly lost ground to the leader. He came in at 1:42+, losing over 4 minutes ground to the racer in first place, who ran a 1:38+. Run times were slow even at the top of the field: in the heat and humidity, even the fast guys were suffering hard.

Only one team signed up for the Half relay, so we were first and last all at the same time! Ron, Scott and Martin wolfed down some post-race food, had three beers that Scott wisely brought along to celebrate, and then headed back to Champaign. Nick collected his trophy at awards (see photo) before heading home.