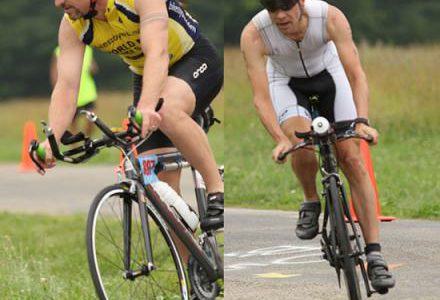 ​Martin’s short version: Sean did a half iron in Springfield and I did a sprint (my excuse: my right foot still hurts). Sean set a new PR at 5:08, and I came in 1st in age group, 8/157 overall. A funny thing happened on the way to the forum, though… 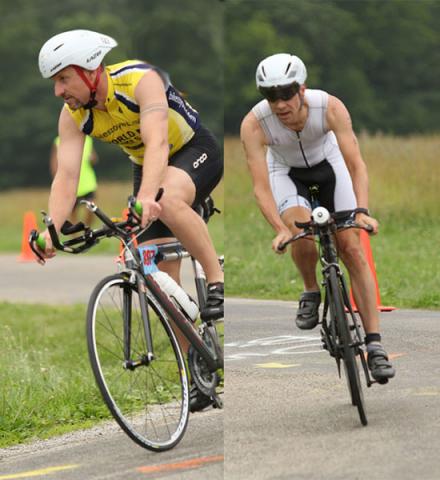 The long: End of July is height of the summer tri season, and the Stoneman/Ironabe/Route66 are three sprint/olympic/half iron distance races on Lake Springfield. Sean and I headed over at 4:30 AM, as the half iron starts at 7. The water was at 83 F, and the humidity probably almost as bad in percent!

After we set up our bikes in transition, it was soon time for Sean to start the swim. He finished in 49 minutes in the rough water. He then passed plenty of people on the bike at almost 22 mph. It rained on the bike, keeping the temperature tolerable and the sun hidden away. For a while it looked like Sean might go sub-5, but then the clouds vanished and the sun came out in full force after 4 hours, slowing down the run. His run was still an impressive 1:41 half marathon, especially in the heat and humidity. Sean finished with a 5:08 PR though, so no complaint there.

My race was much shorter. The funny business: my swim start was set for 8 AM, so at 7:52 I headed to the loo. As I was sauntering back to the pier, the gun went off! I dahsed through the female wave with a “Pardon me, ladies” while the male wave had already taken off. Well, at least this time I passed swimmers left and right. I usually start at the front where I get passed left and right. I finished with a nearly 24 mph bike split, and Sean’s bike drizzle was my run drizzle, keeping the run cool. 1st in my age group, 8/157 overall or top 5%, in 1:05. Again no complaint there, despite missing 30 seconds at the swim start. Unbelievably, I biked faster than Doug Rosen, although he still cracked the whip on the run to end up third overall. Suzanne would have had fun racing against Lisa Becharas (top female), whom I beat by only 5 seconds.

After I was done with my race, I rode the half iron course fast to get in some more miles, shouting encouragement while passing racers. When Sean finished, I supplied him with sodas to cool off. He was melting. I swear he drank 4 sodas in about 2 minutes.