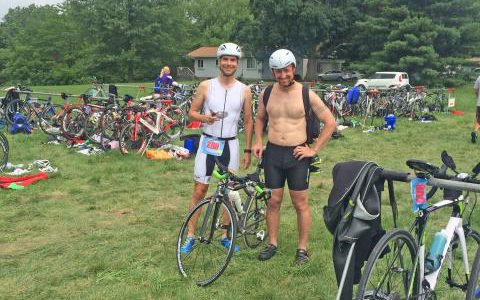 The short reported by Martin: Sean and I headed out to Petersburg near Springfield. I did the Stovepipe Sprint Tri, he did the Railbreaker Olympic Tri. Sean got 2nd in age group, I came in for the overall bronze trophy. Good day at the office. 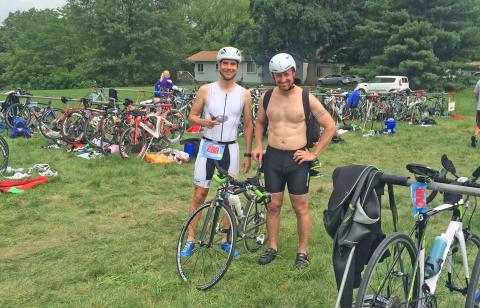 The long: A bundle of Wildcards went racing the June 20th weekend, with Chris Kirkham a the top in an omnium, Ryan Linne and his wi…, uh, sister sweeping the male/female overall podiums at a biathlon, and Sean and I tri-ing at Lincoln-Salem State Park, where tourists can gawk at a reproduction of Lincoln’s childhood log cabin in a pleasant park.

Sean picked me up at 5 AM, and we were all set up by 7 AM in the transition at Lake Petersburg, about 100 miles from Champaign. Tri-Harder is always well organized.

Sean’s triathlon, the Railsplitter, started with a 1500 meter swim in the lukewarm but wetsuit-legal lake. The start was slimy, but the lake was not too bad for middle of June.  The swim was a little slower than usual, as Sean had not swum in months! He complained about sore shoulders afterwards, unusual for him! The real fun began on the bike: A few minutes into the 40k time trial, Sean's pedal came off its spindle at full speed! He stuffed it back onto the spindle, but it was loose from then on. He had to soft-pedal, losing about 5 minutes on the bike. To make up for it, Sean was fresher than usual for the run and put in a 7:02/mile 10k to win 2nd in his age group in 2:25. The AG winner was less than 3 minutes ahead, and there is no doubt in my mind Sean would have come in 1st if his pedal had not literally fallen off the bike.

The Stovepipe Sprint started a half hour later along the same lake route, but my yellow turn buoy was a lot closer than Sean’s! My last race at Tri-Shark had gone “meh,” my heart rate not even topping 160 on the bike. Probably overtraining: I pushed the Wednesday night hammerfest, rode 300 miles that week, and 756 miles the week before. This time I took tapering more seriously, and kept my weekly mileage to 261 plus recovering at the back of the Wednesday ride. The results were good: the swim went unusually fast, only 4 sec behind the gold medalist. On the bike, my heart went up to 165 right away and with a 24.1 mph TT I shot past all but the first place competitor (Doug Rosen, a Sprint expert who beats me at every Sprint). In 2nd transition, I twisted my ankle while ‘braking’ hard in my new minimalist running shoes to throw off my helmet. Minimalist shoes provide minimal stability – no basketball maneuvers in them – duh! I hobbled out of transition in pain for a while, but when a guy I passed on the bike ran past me, I thought “The hell with it, you only live once,” and I picked up the pace to 6:15/mile, passing one competitor and getting passed by another while my ankle was throbbing away. The 5k came in at 6:25/mile, much better than Tri-Shark despite the twisted ankle, leaving me with the overall bronze medal (actually a ceramic sculpture).

After the race, Sean and I gorged on some watermelon and pizza, I guided Sean to the US-55 N of Springfield, whence he drove home and I rode a century home. The century was quite an adventure in itself involving collapsed bridges, miles of gravel road, backtracking, and a loose bottom bracket. Don Hiles and Aaron Higley were of course not impressed by my gravel woes when I told them at Q – they recommended more UCR training!