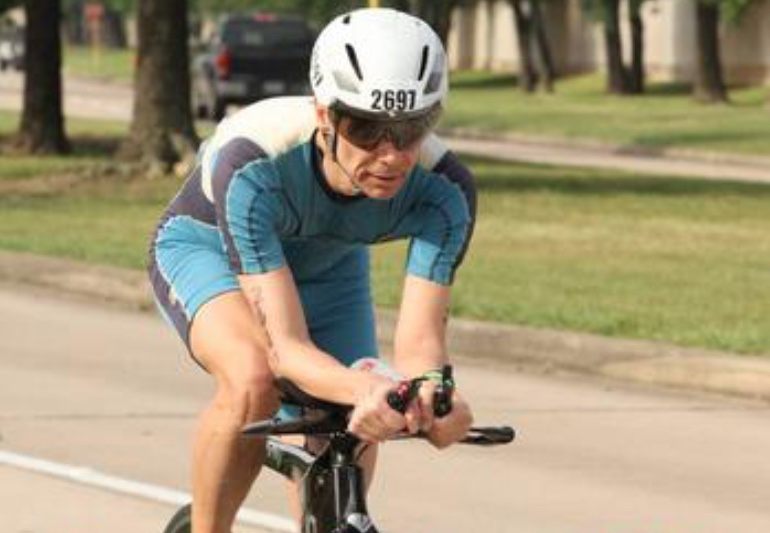 I was in Texas for a few days for business, and signed up for the North American Championship for fun. No swim or bike training this year due to ultrarunning only, so this was a 12:10 instead of 11:01 as in 2014. The heat got me on the run!

After meeting U of I alumni and giving a lecture at U. Houston, I headed over to my Rodeway Inn race motel in Spring about 11 miles south of the Woodlands, dropped of bike and bags, and checked the transition layout (same exact as 2014). I got up at 4:30, and left dressed to race. Suspicious item: my resting heart rate had crept from 38 to 46 bpm over the last few days, and was no better this morning. It was warm already when I got to the swim start, where I started with the 1:10 group after the pros, sub 1 and 1 groups. Not having swum much in 6 months, I was nonetheless entrained by faster swimmers to a 1:26, about 10 minutes slower than my usual trained swim. On to the bike, which was a new (for me) course down Hardy Toll road. Very good layout: back in the left lane, out (south towards Houston) in the middle lane, and race vehicles in the right lane. That was the theory. In practice, pelotons of about 50-60 riders formed who ruthlessly passed in the right lane or left lane, and the tollway was littered with crashed cyclists, victims of the inexperienced aerobar pelotons. I got caught in one that formed behind me about 20 miles into the race, building from 5-6 riders to 40-50 riders in a mere 20 minutes. When it reached ridiculous proportions, and I saw that I could not escape ahead, I slowed to 20 mph until it passed, and then picked up the pace back to 22. The pelotons slowly crept away at 25, one after another, no race officials or penalty tents in sight. I fed well on the ride (6x 100 cal Lärabars, Tailwind sports drink) and finished the 112 miles in 5:13, a very good time for me. The run also started well, I was expecting a 4h30m relaxed run in the 83 °F heat. It went according to plan for about 18 miles, then my stomach felt really sour (unusual) despite not eating or drinking too much. I had to throw up, and did not recover (also unusual). So I had to trot through the last 8 miles at a snail’s pace, losing about 40 minutes on my plan of 11:30 to finish in 12:10.

IM TX was the usual extremely expensive but extremely well organized event. I do wish they enforced their drafting rules, if not for the cheating, at least for safety’s sake. Too many bloody cyclists. The race had 11 non-world-class pros finish in the 7:30-8:00 range, usually reserved as rare world class performances at cool races (this one was warm). Pro drafting? I’m not sure why my stomach gave out. Maybe I was sick with something mild? My elevated resting heart rate did not come back down from 46 to 38 for another 5 days, and I was unable to eat dinner or breakfast the next morning due to a sick stomach. Other than the stomach episode, it was a fun race, and great cross training for my ultraruns after River to River the previous weekend and Calvin’s Challenge the next weekend.