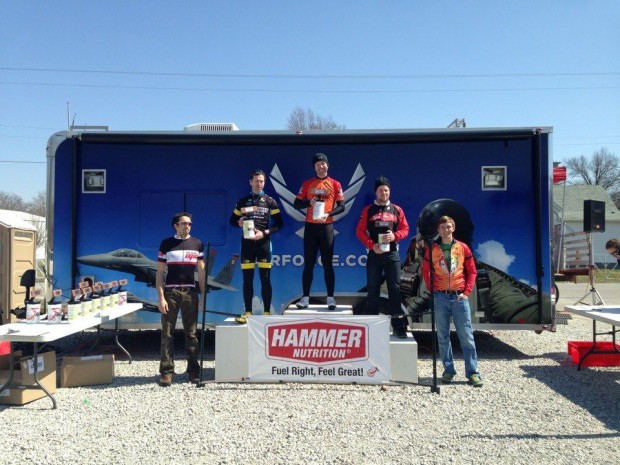 We took off from home on Friday afternoon after dropping my daughter off for her class trip to Italy. About 3 hours on the road my wife and I arrived at Hillsboro Illinois. Our hotel (the red rooster inn http://www.redroosterinn.net/) was kind of cool if you like antiques and old houses. An old style hotel with actual keys for your room and real furniture!

As soon as we got settled in I hopped on my bike and went to go pre-ride the course. Everything was going swimmingly until about halfway through the course I had to ride through some rough gravel and wound up getting a flat. I changed the flat, but in my haste must not have checked it very well because as soon as I put the co2 on the stem and released it popped the second tube (most likey because it was pinched between the tire and the rim). So at this point I’m stuck. I call Julie to come and get me, as I’m talking to her I realize that I have the car keys in my jersey pocket and she can’t drive out to rescue me. She goes down into the hotel bar and asks about getting a cab to come and get me. This small town has no cab service available so the owner of the hotel actually offers to come and get me. Luckily it wound up not being needed because a group of cyclists came through and helped me out. The group wound up being the race director and some other volunteers and they called a truck to come and get me and take me back to my hotel. At this point saying I felt discouraged was an understatment. My initial plan for Friday night was to eat something healthy and decent and not drink any beer. After the night that I had, I wound up stuffing my face with pulled pork nachos and a ponyshoe (brisket and gravy surrounded by a “horseshoe” of fries and sauce). Then proceeded to wash it down with about 3 draft Sierra Nevada pale ales and a six pack of Ranger IPA.

I woke up the next morning feeling like crap from my depression binge the previous night. That condition didn’t really help my nerves in the least. I’m sure Julie was sick to death of hearing me talk about the different scenarios. Everything from “I’m going to get dropped off the back because I feel like shit” to “My teammates are going to be pretty disappointed in how I’m going to ride today”. This morning was quite possibly the longest morning of my life as I slowly got everything ready to head to the race. Continuing on my healthy living tour, I thought the only McDonalds in town was as good a place as any for a healthy pre-race breakfast. I’m sure many champions have started their day with a sausage mcmuffin with egg and a hash brown right? After eating my shameful breakfast I was nervous and disgusted with myself as we arrived at the race. Registration was pretty uneventful, I got right through and received my number to pin on my jersey and tracking anklet. As race time approached I set my trainer up in the parking lot to get my legs warm. Ryan was doing the same about 20 feet away.

At about 10:30 am the women’s cat 4 group took off, which meant the Men’s cat 5 were next. This was it, no turning back now as Aaron, Kyle, Ryan, and myself made our way up to the start line.

As we’re sitting in line the race director explains all the rules of the race. Don’t ditch your water bottles in the ditch. Race clean and be respectful. Don’t cross the center line, don’t pass the pace car etc etc. It was now time to race. There would be a neutral start until we get to the first bridge on the way out of town.

As we’re rolling in our neutral start there are a ton of guys already jockeying for position towards the front of the peloton, which I thought was weird so I just stayed towards the back of the pack. As we crossed the bridge I was expecting all hell to break loose since we were only racing for 1 30 mile loop. Nope…. In fact I couldn’t even tell the difference from how we were doing the neutral start out of town. My original plan was to stay with the front group and don’t pull unless I had to. Do that for 3/4’s of the race and then get a good leadout about 25 miles in. I was following the plan pretty good until the 1st hill. I was at the back of a group of about 30 riders going into the first climb. It was on this hill that I wound up passing about 3/4’s of the field with very little effort. As we’re sitting up near the front of the pack Kyle and I started chatting about how this feels like a Saturday group ride and we’re wondering when the “race” is going to start. This situation lasts until about 6 miles into the race. 6 miles in I figure that I’m going to try to pull a little bit and increase the pace of the race.

I get up to the front with one of the other riders in a 2-wide pace line for a bit. I’m not happy with the pace so I start going a little harder out front, and before long I realized I was about 10 meters ahead of the peloton. I start thinking “great, now i’m out here doing extra work”, but instead of slowing down and sinking back into the pack I just keep going at the rate I’m going figuring once I get a little uncomfortable I will get swallowed back up by the peloton. Wrong…. The next time I look back my lead on the peloton had increased by about 20 meters or so. We go into a couple of climbs and I start thinking to my self “I’m going to try to blast as fast as I can up this climb and see what happens”. So that’s what I did. I did the first climb, then there was a second smaller climb. After the second climb I was probably a good half mile ahead of the peloton by this point. A short time later I looked back and noticed a couple of guys trying to bridge to me. One of them got pretty close but wound up blowing up before he could get to me and sank back into the group. I’d find out later that those two guys were actually fighting each other instead of working together to bridge the gap.

My breakaway happened around the 6 mile mark in the race, which I was thinking the entire time was really really stupid in what is an almost a 30 mile race. Luckily Aaron and Kyle are aware i’m an impatient dummy and they seemed to have had quite the fun time getting up to the front and slowing down the rest of the peloton. Every time they’d get up front they would slow the pack down to about 17mph! After the race it was hilarious to hear some of the other teams talk about their tactics. Without those two I’m pretty sure that leadout would have failed.

Around mile 27 or so I really started feeling it. I had been fighting about a 12mph head wind in the open countryside for awhile with out any protection. As you arrive into town there are two climbs. I give the first climb everything that I have, I’m really hating life by the top and I can feel my heart beating in my neck. I look down at my heart rate and it’s in my maximum range of 180-185. Tunnel vision starts coming on a little bit and I feel like I’m going to bonk. I round a corner and see the second climb. At this point I start getting a little wobbly on the bike. Knowing it’s less than 2 miles to the finish after this climb I put my head down and keep going… pretty slowly. At the top of this climb is a pretty decent descent into the main part of town and on to some brick roads. I rest all the way down the descent and turn around to see if anyone was coming up behind me (there wasn’t yet). I ride the final mile of the race on flat brick roads and come around to the 200 meter mark where the brick turns back into asphalt. I turn around and there are people sprinting behind me. But it was too late. I wound up at the finish 12 seconds in front of the 2nd place finisher.

Had
Aaron and Kyle not had such a blast slowing the peloton down for me, my foolhardy leadout might not have worked. Big kudos to them on having my backside covered (literally).

Ryan reported that he would up getting stuck in a slower moving group that got strung out from the main group at some point, but still finished a very respectable 28th.