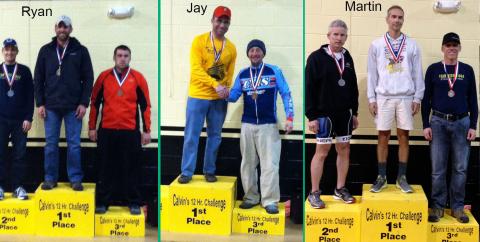 Calvin’s Challenge is a 12 hour ultracycling race in Springfield, Ohio: you do a 50 mile loop from 7 AM to 2 PM, then you switch to a 7 mile loop from 2 PM to 7 PM, and the highest mileage wins. Jay Yost, Martin Gruebele, and Ryan Linne headed over on Friday afternoon, with a race start at 7 AM on Saturday May 3d.  The Wild Card team was the standout team at Calvin’s Challenge this year: Three 1st places in the 35-39/40-44/50-54 age groups, and two podium spots, with Jay 2nd and Martin 3d overall.

The temperature was perfect (45-65 F), but the 25+ mph winds were ferocious. An attendee who had done every single Calvin’s commented that he had only seen one such day before in the history of the race. We laid out our coolers with drinks and food at race headquarters (a school south of Springfield) and got to the starting line. After a neutral rollout behind the race director’s vehicle, a lead group quickly formed: Last year’s winner Collin Johnson from Ann Arbor, Jay, Martin, Ryan, and three local crit racers who wanted to take their base training to a whole different level. They stayed with us into the second loop before falling off; excellent cornering in the wind, as expected from crit racers. A little later in loop 2, Ryan had enough and went solo. Halfway through loop 3, Martin dropped off when he got tired and missed a wheel after a turn into the wind. In loop 4, Collin managed to get Jay off his wheel at a zig-zag turn, and that was that.

From then on, the top of the field just slowly spread out as we did the 50 and 7 mile loops. Martin caught up to Ryan on one of his short loops, and they worked together for the rest of the race. Jay passed them and continued to pursue Collin. In the end, race leader Collin put in 244 miles, Jay 236, Martin 228 and Ryan 214. ‘Low’ mileage, but it felt like plenty to all of us in the 25 mph wind. After downing some BBQ sandwiches provided by the race organizers and collecting our awards (see podium shots), we drove back the 4 hours to home, sweet home.