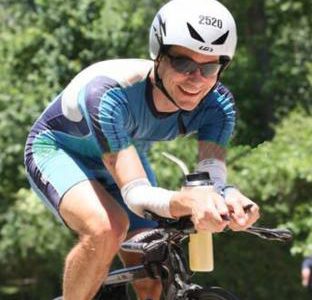 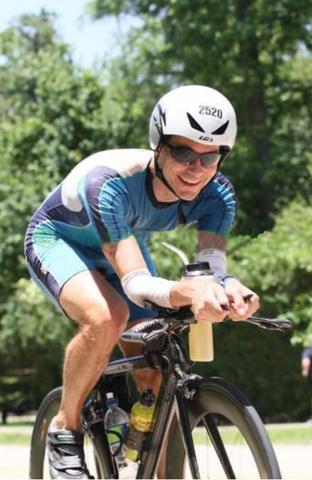 The sub-1 hour event takes place in Mattoon. I have done it many times as a benchmark. This time I placed 3d on the overall podium (82 racers) and 1st in age group, with fastest bike split and running 6:10 miles for the 5k that followed. A good short high intensity effort wedged between Ironman Texas and Ironman Cairns.

The race starts at 8:30, conveniently late for the drive from Champaign not to start too early, The swim is “M”-shaped around 3 buoys in a large roundish outdor pool. It was about 30 seconds slower than my usual, with shoulder pain from IM Texas and training break after LASIK surgery calling for caution. The TT is flat going north on 33d Street, with 6 mph ENE wind and temperature shifting from 65 to 75 F during the race; pretty nice conditions. I went ‘almost all out’ at 161 bpm on the bike for fastest bike split (still smiling on the photo though), felt fresh on the 5k run and ramped it up to 166 bpm, which I held to the finish line. The result is my fastest 5k yet at the end of a sprint distance triathlon. So it looks like the ½ century-old body can still eke out slight improvements. One handy thing about Ironman training is that you don’t get tired in an hour!

This race always has ‘fancy’ trophies (still plastic though, except for the marble base) a friendly atmosphere, and a lot of good pizza and drinks afterwards. They say that next year, they’ll start the time-trial swim on the waterslide into the pool. That should be a blast!