Reported by Martin. The short: I headed out to DC on business, did Ironman Maryland in 11:11 as my weekend entertainment before heading home. I finished the bike ride with the lowest heart rate ever, yet the fastest split, due to two changes (see photo). 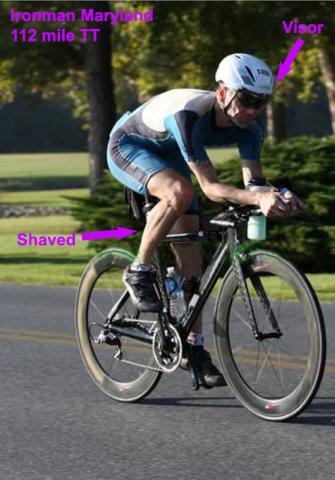 The long: IM Maryland takes place in Cambridge MD, just south of Annapolis. A nice little coastal town, well known to those who have done the Eagleman 70.3 race. T1/T2 are at the same park, and the finish is not far away either; all very convenient when I dropped off bike and transition bags. It was supposed to be cool in the morning (60s), then hot and sunny in the late afternoon (79 F). To be on the safe side, the plan was a low 135/138 bpm on the bike and run because I had suffered more than usual on the runs in Boulder, Louisville and Madison. I figured a 1:20/5:25/4:15 was in the cards, the run being slow due to the heat.

The wetsuit-legal swim was a time trial start, and I seeded myself at the front of the 1:10-1:20 group. So there was not too much battle on the two loop course in the Choptank river. Like the wind, the current slows you down more on the way out than it gives back on the way back, so I ended up with a 1:25, on the slow side. I had optimized transitions to 4-5 minutes each by removing food (now on bike) and sunglasses (see below) from the bags.

The bike course is flat, and the temperatures were moderate (high 60s to mid 70s by the end): a PR course. My previous PR on a similar course was 5:22 at 138 bpm, so I expected something around 5:25 at 135 bpm. I made two major changes: Having read the windtunnel tests on Aero Weenies for shaving limbs (70 sec gain/25 miles claimed!) and for integrated visor helmets (similar claims!), I decided to try it out. I was skeptical of the large numerical claims, but the principles involved are reasonable, and if the claims were true, I should save almost 11 minutes over 112 miles! This would fall outside the noise of small course differences. I bought a Giro aero helmet with visor, and shaved my legs and arms. The helmet is also well vented. I pedaled at 135 bpm, a low effort compared to my usual, but noticed my speed was in the 21.5 to 22 mph range, 1 mph higher than usual! At the end of the bike ride, I decided I could even lay in a taper and still be fast, and rode my average heart rate down to 134 bpm while practically coasting to a 21.6 mph average. Finishing in 5:11, I beat my previous PR by 11 minutes WITH a lower heart rate! This is right on the money for the wind tunnel prediction, or even better (lower heart rate). Although I did not believe it possible beforehand, I am a convert. I now suspect that I could eke out another 10 minutes by paying more attention to aero details on shoes, wheels and frame, where windtunnels predict similar cumulative gains. I estimate that I could save 30 sec on the Seymour TT with visor and shaving, and perhaps yet similar gains with more aero bike/clothing accessories. I currently measure 310 W continuous power output over 20 minutes on my power meter at home, and should be able to improve my Seymour TT from my 26 mph PR to 27 mph if the wind tunnel predictions also hold over the shorter distance. We shall see.

The run went almost according to plan: with the ‘hat trick,’ my head never felt hot and I ran 9:30 miles at 138 bpm without a problem – until mile 20. A couple of miles before that, my stomach felt queasy even though I had not overeaten/overhydrated at all. I finally had to stop and retched (dry heaved) for a few minutes, then I immediately ran at 9:30/mile again. At mile 24, the retching repeated, but I again ran 9:30 miles afterwards, figuring I was good for another 4 miles, with only 2.2 left. I lost precious minutes to retching. 18th in age group in 11:11 was still much better than Madison/ Louisville/ Boulder during the last month. The retching invalidates my favorite hypothesis for throwing up at Texas/Boulder and feeling sick at Louisville: overeating in the heat. In Maryland, my stomach had digested all I ate and drank, and I felt sick anyway. It can’t just be the heat: It was hot in Coeur d’Alene (3:45 marathon) and even hotter in Los Cabos (4:06 marathon). I suspect dehydration due to too much gel/too little water. I could try drinking more water during run (it’s been just a sip of Coke per aid station), and water with gel on the bike. I have a feeling that if I can solve the unpredictably recurring nausea problem, I can combine <5:15 bike splits with < 3:55 marathons.

One more Ironman to go this season, in Cozumel. Nick Paulson will be there, too.