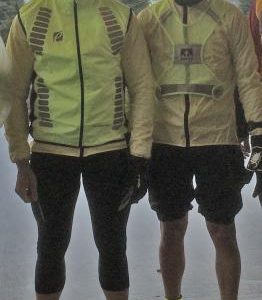 Reported by Martin. The short: Ryan Linne and I headed up to Le Claire, Iowa, to ‘race’ a 187 mile brevet. Starting conditions in Le Claire: 38 F, 25 mph icy-cold rainstorm. Only 4 insane riders showed up, the rest bailed. 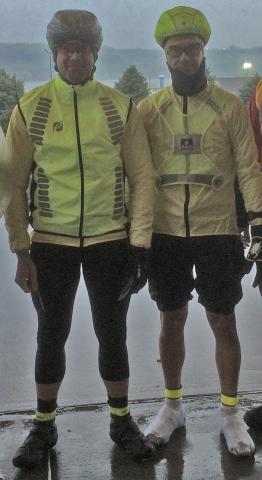 The Le Claire brevet is organized by Mike Fox of Quad Cities Randonneurs, and much to my surprise, Joe Jamison was also at the start line: he used to organize the Metamora, Balltown and WOR ultracycling races. The 300k brevet first takes riders from the Quad Cities to Bellevue on the Mississippi (just south of Dubuque). Then west to Cascade, south to Maquoketa and De Witt, and finally back to Le Claire, for a total of 187 miles.

Ryan and I got up at 5 AM and headed to the start, where we met the other two riders, Mike and Matt. The rain was driven by a 25 mph wind at sub-40 F temperatures. Nonetheless, I decided to ride in shorts and no balaclava, instead donning under my helmet a swim cap left over from Ironman. Ryan and I wore the same bright yellow O2 waterproof vest.

At 7 sharp, we started. Mike was going to take his own good time, and Matt stayed with me and Ryan for about 50 miles until we were approaching Bellevue. There, and at other ‘controls,’ we had our brevet booklet signed and timed by the store attendant. Mike Fox also got call-ins from stores as we passed through.

So now it was Ryan and I at the front. The ride into Cascade, about the midpoint at 95 miles, was relatively easy: the rain had stopped by mid-day, and the 25 mph wind was blowing mostly at our backs. I took off my swim cap, O2 vest and Castelli rain gloves, all of which had done an admirable job at keeping me completely dry and warm in the rain, and fitting into my saddle bag or jersey pockets afterwards. The weight and volume of randonneuring gear is very important because you have to have it all with you on rides up to 900+ miles.

Then we had to double back to get to Maquoketa, and the fun began: it was a hard grind of 1000s of climbing feet of hill after hill (this ain’t Illinois), against gale-force wind. After Maquoketa, it got easier again with a southward ride for a while, but to get into DeWitt, Mike had selected to follow the old Balltown race route east into town. A 10.5 mile hilly stretch into the wind on the 1900 N (“190th Street”) was the mental make-or-break point after 151 miles, with 46 to go.

Once in De Witt, we got our last stamp, and headed back to Le Clair, where we met Mike Fox on his way out of town in the sag wagon to check on the riders. Back in town, we solved the ‘secret control,’ which is an unattended checkpoint included in most brevets. Here: how many zip ties on a certain lamp post in Le Claire? Such little puzzles, and the placement of attended controls on the route, make it impossible to take shortcuts. Not that any randonneur ever would.

After 13 hours in rain, cold and strong winds, Ryan and I were pretty tired. We dug into some pretzels, sausages, schnitzels, burgers and of course beers (for me a dark wheat) at the nearby “Bierstube” before driving home.