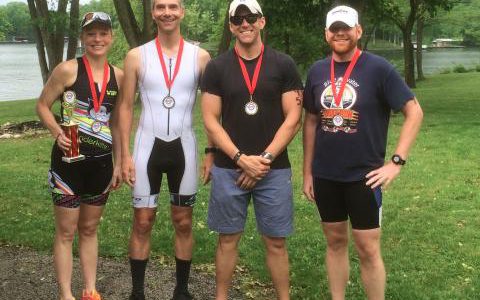 The May Madness sprint tri is held each spring at Lake Sara beach near Effingham, IL.  Four Wild Cards – Martin, Ryan, Suzanne, and Nick – headed down for the race this year for a painful hour+ brick as an early season fitness check. The 400m swim is a single loop in Lake Sara, followed by 13 mile bike and 5k run courses which are both flat and fast out-and-backs.  All four of us took AG podiums, and Suzanne was first overall female.

The race started with a quick, wetsuit-legal swim.  It was an uneventful “mass” start with Suzanne coming out of the water with the 5th fastest swim time.  Nick and Martin followed soon after in 12 and 15th, with Ryan finishing the swim mid-pack losing some time due to a forgotten wetsuit.

Ryan and Martin posted the 2nd and 3rd fastest bike legs, respectively, averaging close to 24 mph and picking up a few places in the overall field.  Suzanne and Nick also put in some strong work on the bike, coming in 10th and 11th overall.

As usual, the run is where the race was determined.  Martin was able to pull ahead of Suzanne with the strongest run in our group to finish 7th overall, and 2nd in his AG to the guy who posted the 2nd fastest overall run time.  Ryan was able to just catch Suzanne on the run to win his age group and finish 8th. Suzanne dominated the women’s field, taking the overall win by more than 6 minutes.  Nick finished 11th overall to also win his age group after running the entire 5k with another racer who got him with a final push at the finish line.

Spring triathlons are exactly what the name implies and Martin put it best after the race when he said the pacing rule in a sprint is to push harder if you ever start to feel comfortable.  After collecting our awards (see picture), the group made its way back for a post-race recovery ride down to Tuscola and back from ER.

Martin, Ryan, Suzanne, and Nick all have more tri’s coming up in June.  Ryan and Martin will continue putting in the long miles on the bike along with Jay as they all get ready for their qualifying brevet series next week for Paris-Brest-Paris in August. 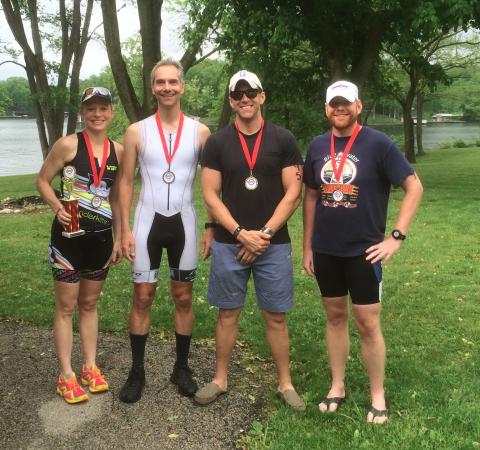