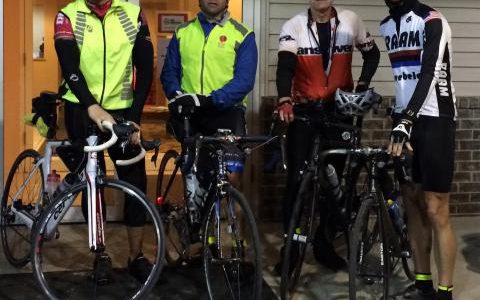 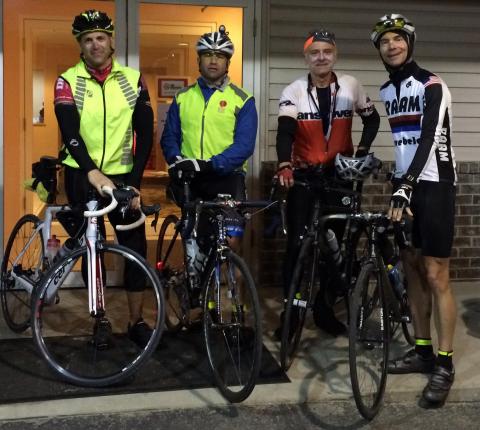 The long: We headed up Sunday night after Martin saw his son ‘walk the walk’ at the engineering graduation. Got to West Union, IA, late, checked our gear, and bedded down.

The 200k started at 7 AM the next morning, and would take us through eastern Iowa to the Mississippi and back. It was a ferociously windy day, so it took us well over 7 hours for the 126 mile ride. Four of us got to the finish ahead of the pack (Photo). Martin accidentally rode over the first rumble strip, and in an attempt to cover up his oversight, rode over every single rumble strip for the next 756 miles. There were many rumble strips, and Ryan ass-iduously avoided them after about 300 miles.

The 400k started at 6 AM the following morning, went northeast across the Mississippi at Lansing, IA, up to Viroqua, WI, and then down to Prairie du Chien before heading back into central Iowa. It was a little less windy that day, and on Martin’s “redzone” indicator, this ride was not much worse than the 200k the day before. We almost missed the ‘info control’ by going so fast we dashed past a greenhouse in Wisconsin. Fortunately Joe Jamison, who used to run the brevet series before current organizer Mike Fox, stopped us and told us to look around to answer the info control question.

The 600k = 378 miles started on Thursday morning at 6 AM. It was a figure 8 loop that first went through Wisconsin and Dubuque back to West Union, then up into Minnesota, to the Mississippi, and back to the finish at West Union. Mike Fox had designed it so riders would do one “o” of the “8,” sleep over in West Union, and do the last 150 mile loop the following day. He wasn’t thinking of us. We got back to West Union in the early evening after 230 miles, steadfastly pulled by Jay, and headed on to Minnesota immediately. Martin occasionally got to pull for 10 seconds when Jay’s focus wandered (it happens at night – you think you're gliding along fast in the darkness, but doing only 17 mph) before Jay surged back to the front. After cold winds and a 4 mile gravel stretch with steep descents and climbs (oh, how Martin loved it – he may actually have cursed), we arrived in Spring Valley MN after midnight – and the gas station/control was closed! Without fresh food and drink, we rode to the next control in Lansing on the Mississippi – also closed when we got there at 3:30 AM! Not having restocked our food and drink for 8 hours, we decided to bed down at an Inn, got up at 6:45 once the gas station had opened, ate breakfast, and rode the remaining 70 miles to West Union. We finished that segment in under 30 hours, not counting a 10 minute chat with Mike and Joe, who had driven backwards on the route to congratulate us.

We all sent in our registrations to Paris-Brest-Paris, they were accepted, and will be at the 80 hour start line at 16:45 French time on August 18, 2015. Follow us on the Paris-Brest-Paris website!