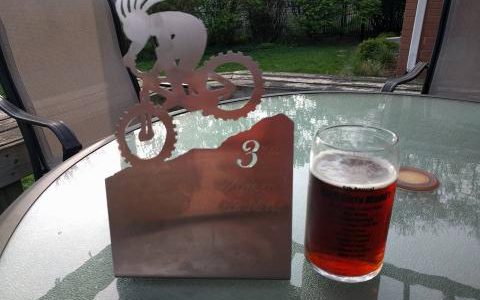 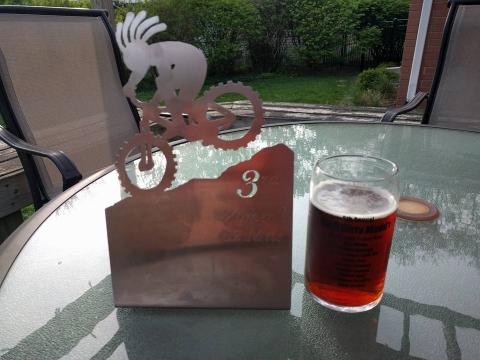 CICA’s 5th Annual Dirty Mudd’r was my second attempt at a non-local gravel race (the first attempt having been the 2015 Gravel Grovel, which was wet, muddy, and miserable). I’ve been training a lot and I was gunning to win.

The race started with a very slow truck lead-out for more than the first mile. I got to sit behind Jason Rassi and Larry Fitz and listen to them talk about random stuff. After we turned onto the first gravel road the conversation stopped and the lead group surged, with my teammates Art Hess, Neil Fortner, and Larry all in it. There was a breakaway attempt Neil got in on which was reeled in pretty quickly, and I managed to stay with this lead group for the first 8 miles, although I was sticking my neck out a bit too much.

At about that point we turned out of the headwind into a crosswind and I lost contact with the group. That was the last I saw of Neil. I paced alone behind them for a bit but then I ended up in a trio with Jeff Eckert and I think Eric Schroeder and they helped me trying to bridge up to the next group. We never made it but then a guy from Half Acre arrived from behind with a large group and we rode the next mile or two together up to the rest stop at perhaps the 16 mile mark with me in the middle, eating.

As we got to the rest stop I realized that there might have been another female in that group so I blew through solo, grateful I’d had the good sense to eat just prior. As I rounded the next corner I passed Larry roadside with a flat. He cheered me on and I settled into my aerobars for the crosswinds. A nice guy who had just finished the Tour of Hermann came up and we rode together for a bit trading off at the front, and then we hit the tailwind section and we flew. In one of those tailwind sections that guy was pulling with me on his wheel and we blew past Art – I tried to yell at him from behind so he’d know we were coming and could latch on but we were going 25 mph and he wasn’t keen.

A little later that guy and I came to what looked like a T in the road. I knew we were not supposed to have any more south segments for quite some time so we went north. My phone beeped at me telling me that was wrong, so I stopped and Art’s group rolled up with a guy there saying that his Garmin was telling him he was offcourse too. It turns out we were supposed to go straight, through the grass, so we did, and I lost Art and all of them.

At the two hour mark some friendly riders came up and were trying to help me along but I had to stop to put sunscreeen on or I would get burned later. While stopped there Kelsey Phillips, the gal who came in first, passed me, riding solo. I tried to hurry and get on the road but I had taken my gloves, watch, and helmet off, and had to get them back on… I had also dumbly stowed my sunscreen in a hard-to-reach spot – I won’t do that again.

I fell down on the second grass section – it was a pretty rutted dirt two track and I had been riding on the grass in the middle but then the ruts flattened out. I thought I could ride in one, but then it became a bad rut again. Two guys from Spin City Cycles came up and asked if I was OK – one said he had just done the same thing, which made me feel better. I ended up riding a bit with them until one of them got a flat and they both stopped.

At the second rest stop there was an awesome guy who came up and asked me what I needed, which was water, and he went and got it and filled everything and gave me cookies and sent me on my way after confirming I was in second place.

The rest of the tailwinds I tried to rock through, and even the crosswinds, knowing that a horrible 6 mile stretch of what had ratcheted up to 20 mph headwind awaited. Shortly after turning onto that a guy in Rapha stuff was stopped by the side and I told him he could do it as I went past. A little later when I was stopped by the side he came past and we exchanged basically the same. He pulled me for a bit and then when I pulled, sadly, I lost him. He passed me later though and I couldn’t catch his wheel, but he rode just ahead of me for a few miles, stopping here and there to let me catch up.

About 3.5 miles from the finish Jeff Eckert (who was riding a mountain bike!) bridged up to us, probably killing himself to do it, to let me know that there were two women in the large group approaching who were gunning for 2nd and 3rd. The guys in that group were helping them so they could be fresh enough to win a sprint. The guy in Rapha heard this and joined in a rotating paceline to help get me away from them. We gapped them a bit but they were mostly holding steady behind us… I was aware that if I wanted a trophy I had to suck it up.

On the last gravel stretch there was a downhill/uphill roller about 1.5 miles from the finish. I know I’m good at those if I can work up speed on the downhill and conserve momentum to push me up the next hill. I thanked the guys and left them and hit the hill hard. I had to stop for a car before turning onto the final paved section, which was horrible, knowing that might mean that they would catch me, but safety is important, even in a bike race I guess. Then I hit the pavement in my aerobars, flattened my back, and put my head down, trying cut the headwind enough to make it matter.

When I entered the park alone I knew I had it, for that road is a sort of gravel I do well, the trees sheltered it from the wind, and the downhill to the finish would let me gather speed. I crossed the finish line gasping for air, but grateful to be telling the guy how to properly spell my name, even if it was on the 3rd line and a gal who Kelsey and I had never seen somehow snuck into 2nd. 3rd place still got a sweet trophy.