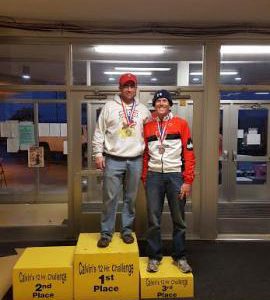 This year's 26th Annual Calvin's Challenge held April 30 in Springfield, Ohio was this year's host to the World 12 Hour Championship. I didn't know this going in and lacked a membership to UMCA, which would have awarded the world championship trophy to me had I won, but that was perhaps good because I wasn't intimidated by how big of a deal it was. For Midwest ultra-cycling, it's sort of the last hold-out, which makes the news that this year was the last year they were having it all the sadder.

The 12 hour race was 7 am to 7 pm and we all knew it would start raining on us by 10, with 15 mph winds and stronger gusts from the east expected all day. At set-up time the temperature was around 45 and probably made it all the way up to 50. I knew it was going to be cold and wet and tried to dress accordingly with knee-high socks (which read "BEER"), wool arm warmers, fingered gloves, a vest, and a bandana covering my ears, in addition to the usual jersey and shorts.

The race is split into two loops – a 50.5 mile loop which you traverse early in the day, and then at 3 pm they open a 7 mile loop you can choose to go into after that, and must enter anytime after 4:30. You set your cooler up at the school, pre-loaded with bottles of fuel and gel, and in my case, a few mini-Cokes, beef jerky, and a lot of Rice Krispie Treats, and then stop to refuel on each long loop, or every few short loops.

The race began with lead-out for the first 5.5 miles. There were 158 registrants but I suspect only 100 showed given the forecast. I sat myself behind teammates Jay Yost (an ultra-cycling veteran) and David McDowell (for whom this was also his first Calvin's Challenge) until the pace crept up to where I decided I needed to stick my neck out less, which happened within a mile or two. The group split a few times a few ways, and when I lost contact with Jay and David's group we were perhaps at mile 8.

I found lots of other people to ride with, including Bob and Mary Anthony on a tandem (category winners) who cruised along at around 20 mph and stood for hills. Riding with them felt just like a recent Saturday Morning Ride on which I rode behind Martin Grubele and Dave Stone for miles. I probably drafted them for 100 miles, and although I offered to give them a pull if they wanted it they tended to ride the whole loop and then take a long break. I was taking very short breaks (I probably rode for 11:53 of the 12 hours) and thus I would refuel and cruise up the road until inevitably they came past again with a wheel to grab. They were awesome.

I had gone into the race with two goals – to ride more than 200 miles, and to race for all 12 hours. Thus at 3:15 I had to make a decision – would I follow Martin's advice of entering the 7 mile loop so that I could potentially draft more people as they came into it, or would I follow Jay's advice for a 4th 50 mile loop which would prevent me from stopping every 7 miles to rest or refuel or possibly quit? Knowing my goals and my propensity to quit after around 10.5 hours of racing each July at Jay's Fat-Ass 12-Hour Race I decided to force myself into the 200 miles by taking that 4th lap.

At this point I knew my competitor and Calvin's Challenge veteran Andrea Matney was about a quarter mile ahead of me and was going to take the 7 mile loop, and had heard that former winner Pascale Lercangee had managed to stick wtih Jay's group for much longer. Presumably she had made it to the fork before 3, giving her no choice but to do a 4th lap, and I did not think that I had any chance at all of winning the overall.

Thus I set out alone with my main goals in mind and in the headwind and cold felt like I was crawling. I started doing calculations at every mile marker, concerned that I had dropped below 12 mph, concerned that I would not make it out of the 50-mile loop before time, considering stopping at every intersection with a volunteer to ask what I was supposed to do if that happened, you name the panic, I had it. I thanked all the volunteers I passed, in part because I was convinced I was the only person still out there and they were having to babysit me. But still I rode on, and then stopped to take some ibuprofen and miraculously it kicked in and suddenly I felt better – less miserable, more like I was going to be OK.

About that time I hit the 25 mile checkpoint and knew I was going to finish in time. I didn't know quite how fast I was going but I started passing people, including one lady who was on her 3rd lap. I sat up and slowed letting her draft me for maybe 10 miles until a guy and a gal came tearing past. I think I would have let them go except that the lady's number was 638,which I realized was close to my number (636). I became concerned that perhaps she was in my age group, so I said goodbye to the gal I had been pulling (who was going to be fine and would make it) and chased them down.

My catching their wheels seemed to lead to another speed-up on their part, although maybe just the effort of catching them wore on me, and I shortly lost it again. I expected them to disappear off into the distance, but I think I paced them about a quarter mile behind for several miles. As we neared the final few hills into town I realized that if I hustled I would have time for a full 7 mile loop and possibly more before time. Thus I drank all my Gatorade and did not stop at my cooler as I came through, although I did slow for a fist pump when I was cheered for finishing my 4th lap by those at base.

At that point I don't really know what got into me. I entered the 7 mile loop and passed lots of people. I told them all they were doing a great job, and was told by many that I was killing it in return. I finished my loop and the folks at the start told me I had time for 3 more miles and I told them no, there was time for 4.

And there was time for 4… My total mileage for the 12 hours ended up 213. I won the 35-39 F single bike age group as the only racer in it, but I would even have won a coed 30-39 age group against 12 men with that mileage, so I'll take it. It was awesome. Number 638 turned out to be RAAM finisher Nancy Guth, and she finished with 214 miles. Andrea had 217, and Pascale was awarded the world championship trophy for her 221. Coming in 4th to such huge names was an honor.

Jay also won his age group with 241 miles, and David came in second with the bad luck of being in the age group with the overall winner Billy Volchko who rode 250 miles.

All said it was really fun. I still can't believe that I rode my bike that far. I also still can't believe I feel this OK after that, so a lot of thanks has to go to Martin who has dragged me around for hundreds of miles this year. We're lucky to have such a great team here. 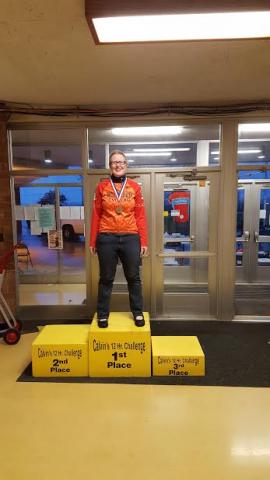