(Reported by Martin) On Friday night, Jens Müller, Mike Balajewicz, Ryan Linne, Jeff Turner and I drove to Eldridge, IA for a 300k (189 mile) brevet organized by Mike Fox. (Photo: our team before the start.) 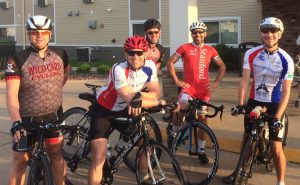 Over 25 randonneurs showed up, a big field by brevet standards – riders were starved for some distance after the winter’s break! Brevets are timed rides with a cutoff time and intermediate time controls. If that sounds awfully like a race, it is, except in the randonneuring spirit, there is no podium, and riders assist one another and put cycling camaraderie ahead of placement. Like the Paris-Brest-Paris 1200k that Jay, Ryan and I did in 2015.
The temperature got hot (61 F at the start, 81 F maximum in the afternoon), and the wind did not cooperate: 25 mph SW would make the ride back from the northern town of Peosta a challenge! After the 7 AM start, a lead group consisting of our team and Tom McKenna, in his final stages of preparation for 2017 RAAM solo, quickly formed. Tom rode near us, but without drafting, to simulate RAAM conditions. It was a fast ride out (24 mph average) for the first third. By Peosta we were at least a half hour ahead of the rest of the field.
Then the wind and heat began to take its toll. Mike and Ryan felt a little low on energy in the middle third, but some sandwiches at the Cascade control fixed that. Having worked hard at the front in the morning, Jeff suffered a combination of heat stroke and low sodium (his jersey had a crust of salt all over it), and had to take it easy in the last third. The team stayed together, as it should be in randonneuring. Then a full-on thunderstorm caught us. Martin began to lose control of his arms and shivering in the cold rain, a familiar warning sign of hypothermia, and had to pick up the speed with only Jens for company, to generate enough body heat.
Everyone reunited once the rain passed, and rode to the finish in 12 hours even. Tom McKenna probably came in over an hour earlier, and Martin’s course record of 9:58, ridden solo in 2016 while preparing for RAAM, was not broken this year. At the finish, hypothermia finally got the better of Jeff, and the hotel staff wrapped him in sheets, freshly warm from the dryer, until his color returned and he stopped shivering. So Jeff gets the award for forging on against the greatest adversity that day.
Afterwards, Jens, and his very patient wife (she waited in Eldridge while we were racing) drove back to Chicago, while the rest of us enjoyed two sausage samplers, schnitzels, and 1 liter beers at the Bierstube in LeClair on the Mississippi river, before heading home to Champaign.