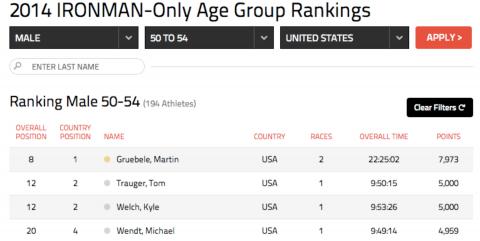 The long: IM Texas is raced in The Woodlands, a hyper-rich suburb of Houston. The swim is in an artificial lake, the bike is a single loop over country roads, the run along the lake and a canal. A nice venue. I drove down there ca. 1000 miles.

On race day, the afternoon temperature was ‘only’ 83 F, with ‘only’ 10 mph wind. Still hot and windy, but it can be much worse in Houston this time of the year. I arrived Thursday just at the race check-in deadline. The next day I dropped off my bike and transition bags. My conspiracy theory is that the IM organizers add a ‘free day’ to get more kickback from the local hotels and chamber of commerce.

I got up at 4:30 on Saturday, put on my race unitard, and headed to the swim start. In IM swims, you usually get clobbered once during the race: It is a mass start with 3000 bodies in the water in a small space. At IM Texas, you get a double dose! After about 2 miles, the swim veers into a canal only 8 armspans wide. Well, ah love it! I always start at the very front of those swims, getting dragged along by fast swimmers; and I can jostle with the best of them as they swim over me.  The canal is something to be experienced by any swimmer used to following black lines at the bottom of a pool with 1-2 others in the lane. Make that 20 others in the lane, and you get the picture! I took 1h23m, about 5 minutes slower than my usual. Maybe because all swim practice was strictly barred after my LASIK operation a month ago? Or too much jostling in the canal? Anyway, it was a fun swim.

The bike went well: 21 mph + a quick nature break over 112 miles in 5h22m in increasing heat up to 83 F, and with quite the south wind blowing on 1/3 of the loop. I pedaled at 135-140 bpm, a heart rate that allows me to run a strong marathon afterwards. Basically the Maffetone heart rate+5 beats, which is optimal for 10-12 hour races. One little mishap: at 20 miles, the velcro strap of my saddlebag came off, and the bag dropped to the side of the seat tube, held only by a string wrapped around the seat tube. My left heel would kick the bag a little at every stroke, and I was wondering how long it would hang on. Finally I decided the string was secure enough, and that I would fix it at my bathroom break at 70 miles so as not to waste time. 50 miles and 10000 kicks later, I found an aid station volunteer who strapped the saddlebag securely to the side of my seat tube while I obeyed mother nature, just 2 minutes lost. I added a food innovation to the bike ride: I normally take in 275 kCal/hour, in the form of a gel and sports drink. I decided to cut the time between gels from 45m to 30m, adding another 50 kCal every hour. This worked great on the bike – I felt strong and fresh coming into T2 –  but the same idea would later prove fatal.

The run started well, maintaining 140 bpm and on target for a well-sub-4 marathon. I’ve run 3:10 marathons, and 3:51 during < 80 F IM races, but I have never been able to do sub-4 at a >80 F IM race. This time, I added two ‘innovations’ to see if I could go sub-4: First, I pinned a towel into the roof of my running cap so it would hang over the back of my neck (like in those desert movies), and brought a bike bottle to the run. This volunteers filled with ice water at every aid station, and I poured it on the cap to keep the towel soaked. The evaporative cooling worked great, and I never felt the heat distress that usually slows me down in races at > 80 F. So this innovation was a winner.

The second innovation was a loser: I decided, since it worked great on the bike, to eat a gel every 30m during the run. They say you should never try anything new during a race without first testing it. They were right in this case. I can only say in my defense that there are some things you can only test racing because training never pushes you to the limit where the test would fail. Anyway, when you cycle, you move very smoothy, and your stomach can be pushed to a certain limit before complaining. On the run, said stomach gets jostled more and is much less forgiving. At mile 16 I had to throw up everything I ate and drank during the past hour or so. Running another 10 miles on an empty stomach with no carbohydrate reserves sucks. Fortunately, I am pretty hardened from training, so I ran anyway where others choose to walk. However, my heart rate had to drop from 140 to 125 bpm, where 90% of my energy comes from fat burning. That means slow running. After about 4 painful miles, my stomach approved of a sip of coke, and at the next aid station again. Eventually, I had enough carbs to speed up to 140 bpm once more. I looked at my watch, and it was close but no cigar in the end: I came in with a 4:02 marathon.

If I had eaten a gel at my usual 45m intervals on the run and not thrown up, I estimate I would have made it in 3:58. Well, there are several hot IM left on my schedule this summer, and I can test my theory there. I am happy, though: thanks to the soaked cap, this was still my fastest IM marathon at T > 80 F. And even if I had finished in 10:57 overall, I still would have been 18th, as the next faster 50 year old finished in 10:54.

Finally, quantity has a quality all its own: As you can see from the race report image, I am currently ranked 1st in the US in my age group, and 8th worldwide.  That’s because I’m the only one in the US who’s done two IM in 2014 so far, and they add the three top races for the ranking. My 1st place won’t last long, only until the strong guys do their 2nd and 3d races and get 15000 points vs. my expected measly ≈12000 points. Still, I estimate I’ll be around position 30 in the US by August. Maybe the WTC people will have mercy on me and accept my legacy application for Kona based on US ranking?