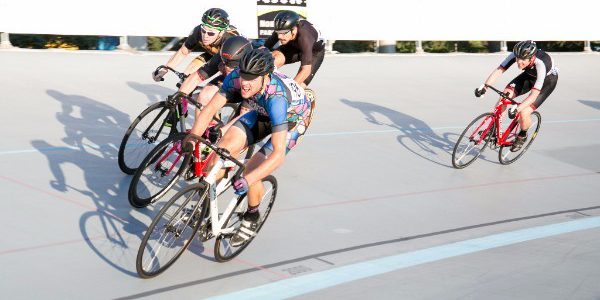 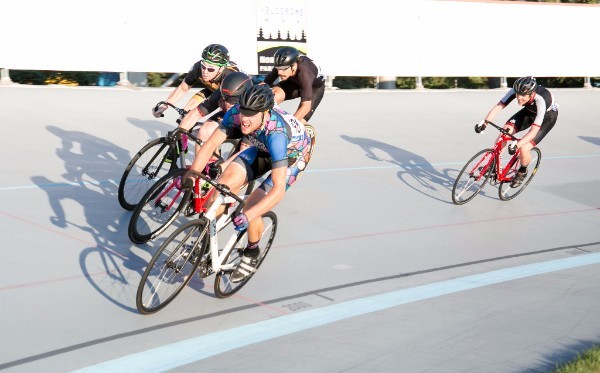 Track sprint season has finally started for me, and I opened off the season by taking the win at the first of 3 annual Keirins in Northbrook last night.  It was a competitive 16 person field, so there was a semifinal where the top 4 from each heat of 8 advanced.  For the semifinal, I drew the pole position and was required to take the wheel of the motorcycle.  Right when it pulled off, someone came over the top of me and attacked, so I jumped on his wheel and rode it in to the finish (pictured above-I’m 2nd wheel).  There were 4 of us across the track at the line, so it ended up being close.  I still don’t know if I got 2nd, 3rd, or 4th.  In retrospect, I gambled a little too much here by assuming I was going to be ok.  We were doing 37mph in the last bend, so I didn’t expect anyone to overtake us.  Lesson learned.

In the final, I drew pole position again.  I did the math on this and determined that the odds of drawing pole position twice in a row are 1.56%.  Obviously it was my lucky night.  This race played out differently, and no one attacked when the moto pulled off, leaving me in the wind.  I slowed immediately, the field spread out, and I moved up track a bit to pick up some elevation.  A hard attack came on my left through the sprinters lane, with one rider on his wheel.  I jumped third in line and let the attack pull me out of the pack.  The easiest way to lose a keirin, or any track race for that matter, is by getting boxed in from waiting too long to sprint, so I jumped just inside of 200m to go as I knew the other 5 riders would be coming.  I found some power in my legs that had been missing for the earlier part of the night and was surprised how quickly I overtook the leader.  I was in the clear with 50m to go and claimed a pretty convincing win.

I also went on to win the 3 lap scratch race that serves as the closing event for Keirin nights in Northbrook.  A handful of guys left their giant Keirin gears on, so they attacked and kept the speed high for most of the race, until they inexplicably slowed with 1 ¼ laps remaining.  This made things fairly easy for me as I had geared down to my 50×15 scratch race gear, which gave me a lot more acceleration in the final 200m.  This was a much closer finish than the Keirin final, and I actually thought the rider that came outside me at the end won it, but video apparently showed that I got there first.
I took the overall win for the night’s omnium, which also lands me another 5 upgrade points.  I’m over halfway to the cat 3 upgrade points I need, but I still intend to finish this year in the 4’s so I can take a crack at the cat 4 state championship in the Keirin.